By January water levels had returned to near normal, however, there was significant impact to the floating vegetation that the manatees feed on.  The summer rainy season was relatively normal and much of the vegetation returned to normal by the end of August. The timing of the natural rhythm of the river, its animals and plants.  The breeding habits of many of the birds was altered - the Great Blue Herons that normally begin nesting on Valentine’s Day was late by several weeks.  The owls were late in returning to their breeding grounds and so also were the Osprey.  The Little Blue Herons and Limpkins were early in their breeding cycle; and the alligators were late to breed and many of the nests were washed away by flooding.

Irma was a completely different kind of storm just a month later.  The saturated ground from Mathew just added to the impact of Irma’s destruction. The river crested at 6.9 feet above flood stage and there was significant flooding in Jacksonville where the River empties into the Atlantic Ocean.  This was caused by tidal surge from the storm and by high tides that lasted for almost a week.  The St Johns puts five billion gallons of water a day into the Atlantic so for those 5 days of high water in the Atlantic caused all of the water to backup upstream.  Irma was over Florida for 29 hours and dumping tons of water.  In our little part of the river, our marina and or business was shut down until November 19th,2017.  Once we were able to open, the water level was still so high that we had to have 5 steps leading up to our boat (beating our previous record of two steps).

The effects of the flooding caused the sewage treatment plant in Sanford to pour untreated sewage into the river; and once the water was contained reached the water, the treatment facility was unable to do its job because the current in the river was five to seven knots giving insufficient time for the effluent to be properly treated before it made its way into the river. 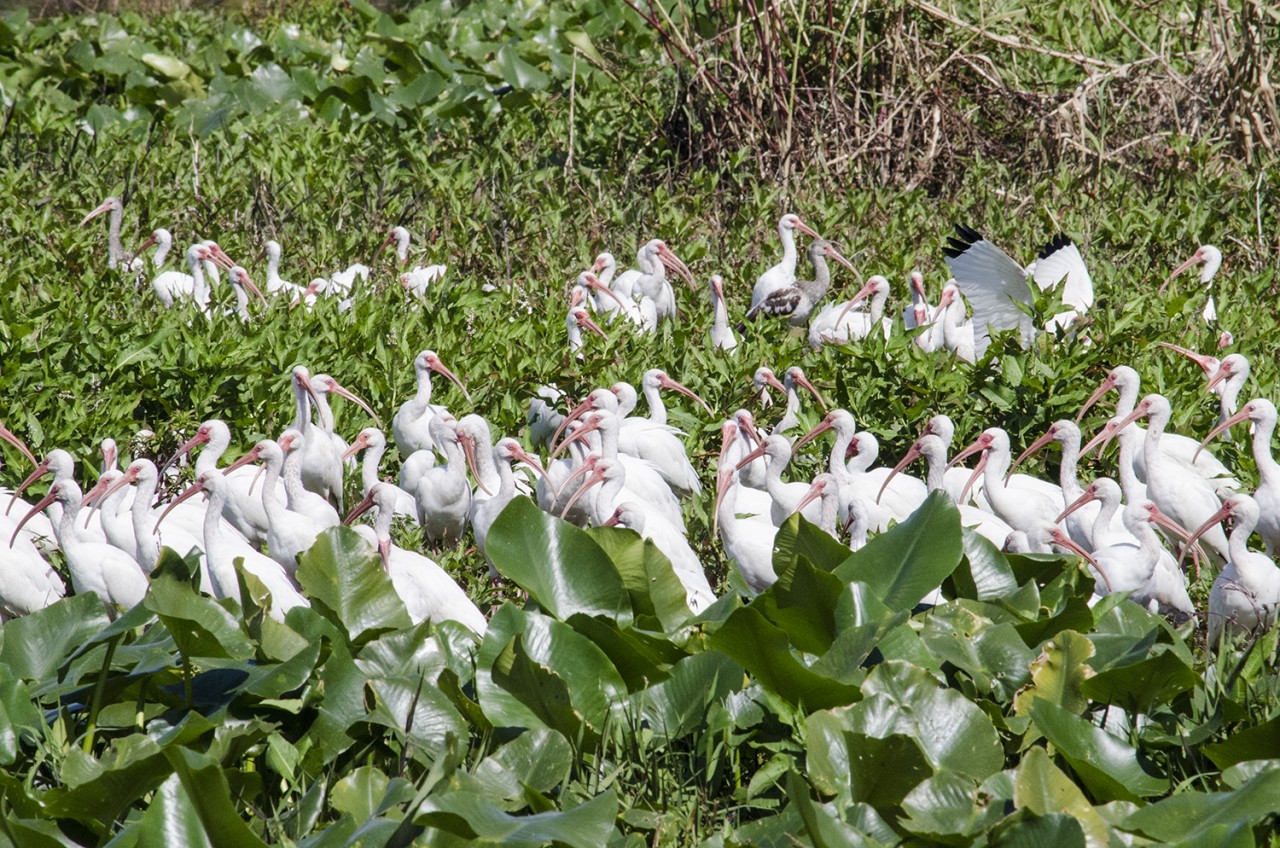 As I write this today in mid-January of 2019 the water levels are still not back to normal!  Some of the land is still flooded.  As a result, the undergrowth has not returned and there are many acres of denuded land that has no grass and plants for the bugs and smaller creatures to have a food source, hence they are not here.  Which affects the rest of the food chain.  The mice, moles, bunnies, squirrels and the like are also not returning, which means the larger raptors like the Barred Owls are missing as well.  Due to the increased speed of the current, much of the floating vegetation is also not in the river which has me concerned for the manatees who depend on the vegetation as their only food source.

A number of our migratory birds are not here this year, either.  I have not seen one Pied Billed Grebe this winter. The Glossy Ibis are not to be seen nor are the American Coots which in previous years have been here in great numbers. The number of Wood Storks is down significantly.  The alligator babies are not to be seen either. The smallest ones I have seen so far seem to be from last year’s clutches. Though I have seen some evidence of deer, I have only seen a few so far this fall and winter. The turkeys are also a rare sighting because their food sources are not available either.

All is not bad on the river.  The Limpkins are making a wonderful recovery we are seeing between 25 and 40 on any given day.  Hurray for these wonderful birds!  We are seeing a lot of Anhinga, Little Blue Herons and we have been seeing at least 5 American Bitterns a week.  The Black Crowned Night Herons are here in greater numbers than I have ever seen them before.  We have seen some accidentals like Roseate Spoonbills and Forester Terns.  Our Osprey are back and a few weeks earlier than normal. The Sandhill Cranes are starting to come to the river looking for nesting spots but there are no nests so far. Last but by far not least, we are seeing alligators, alligators, alligators!