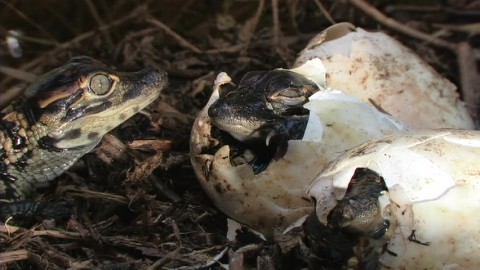 Which is correct? "Let's eat gator," or "Let's eat, Gator?" Actually, in this particular case, the answer is both. Along the St. Johns, it's an eat or be eaten world, for sure, and that holds true for Florida's apex predator, the American alligator. From the moment they hatch to their very last breaths, alligators are always chomping or being chomped, and today, we are going to take a look at their very dramatic life cycle.

Courtship for Florida alligators begins in early April, with mating usually occurring in May or June. From mid-August through September, the yellow and black striped babies starting hatching, thus beginning their perilous journey to adulthood. Like most baby animals, they are ridiculously cute at this stage. See? 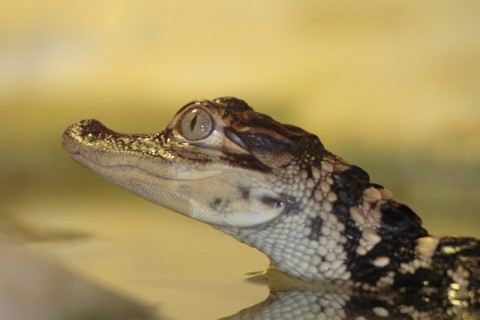 (He's smiling at you. Smile back!) 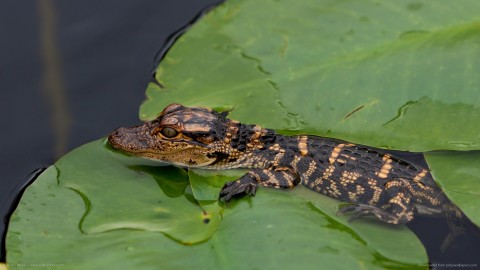 A baby alligator's bright yellow and black stripes aren't just for looks, though. They help camouflage the little guys when they are lying about in the reeds and bulrushes. 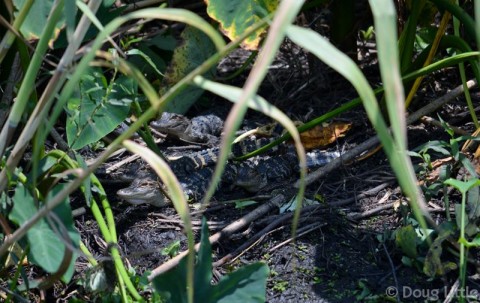 See How the Patterns of Light & Dark Help Break Up Their Body Shapes?

While camouflage is the first protection the little guys have going for them, by far their best protection is their mama. Mama gators guard their hatchlings for the first couple of years, and they do so diligently and fiercely. Their mere presence is usually a darn good deterrent. Look closely at this next picture. There are 3 different sized babies here, indicating a new clutch, and two older ones. 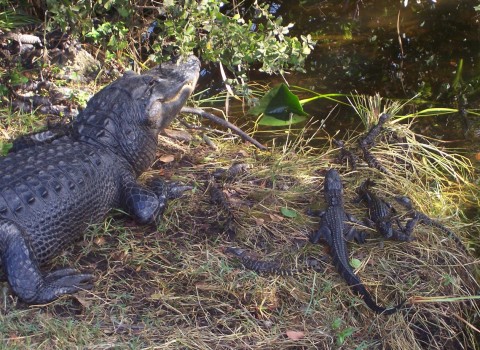 Would YOU try to snatch one of these little guys?

Mama gators make great couches and river transportation, too, all the while, keeping danger at bay. 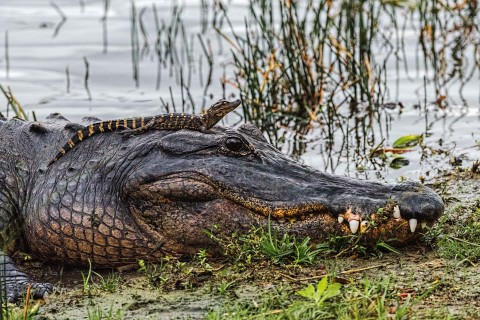 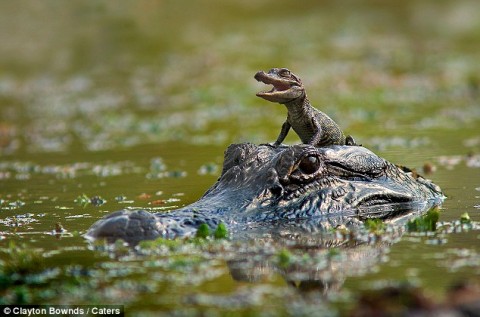 And a Swell River Ride, Too. Wheeee.

Is all this vigilance necessary? After all, baby gators don't look like they'd be all that tender and yummy, do they? Perhaps not to us, but trust me on this. Everything eats baby alligators. At least, everything that lives in their near vicinity. Big fish eat them. Large turtles eat them. Raccoons eat them (and their eggs). Lots of birds eat them. And bigger, older alligators eat them, too. After the first three years or so, even MOM eats them. 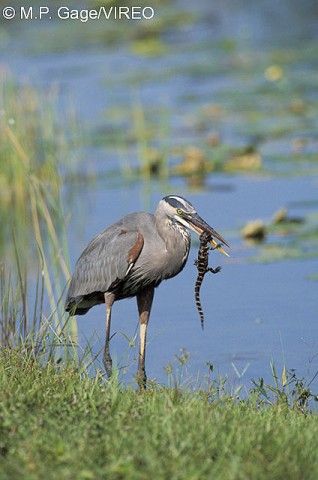 This Great Blue Heron Is Happy! He Has Caught Himself a Tasty Lunch. 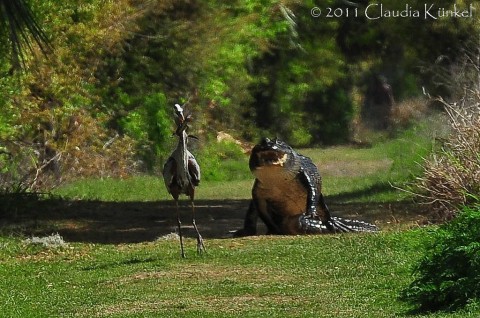 This One is Not Nearly as Happy. His Lunch is About to Be Rescued by a Very Angry Mama Gator. 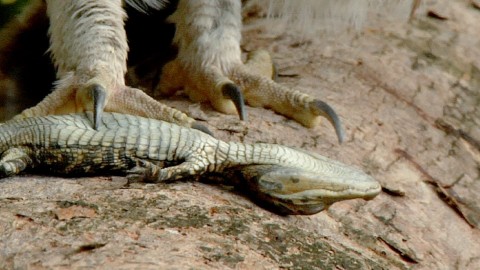 And This Little Guy Was Snatched Up By an Owl, Believe It Or Not.

Here are the facts. Approximately one-third of all alligator nests are ravaged by predators, raccoons chief among them, or destroyed by flooding. Of the clutches that survive those dangers, about 24 hatchlings will emerge alive, but only around 10 of those will survive their first year. See? A whole lotta chompin' goin' on.

In return, baby gators enjoy a wide variety of insects, small crayfish, and whatever else they are able to snatch up. 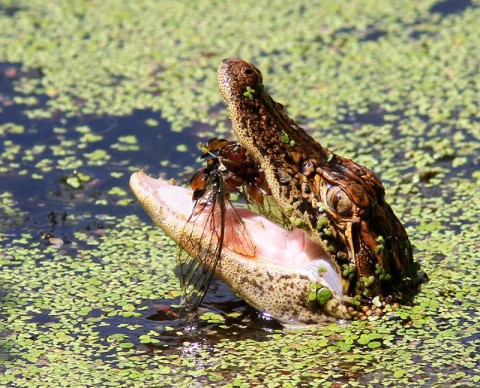 About now, you might be wondering at what point do these little stripey guys become large enough to avoid predation by everything that flies, crawls, or slinks through the swamp. Well, sadly, the answer is that it takes a LONG time for alligators to be safe from predators. Because . . . BIGGER alligators! Where there are young gators, there will be older gators, and all of them hungry. The big guy below has bagged a 4-footer for his lunch. 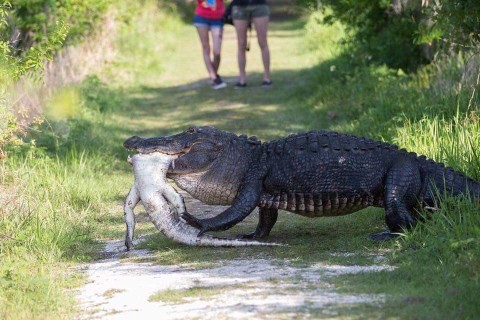 As you can tell from the above image, even alligators four and five feet long can be eaten by larger ones. Small gators like this poor guy haven't even lost all their stripes yet, but they apparently aren't using them quite as effectively as they did when younger.

Let's take a closer look at these intermediate sized alligators. As they start to get a foot or two of growth on them, they cease to be quite so interesting to birds and raccoons, but they still have to be careful of larger gators, including, eventually, Mom. At this point, their own diets are graduating from minnows and bugs to slightly larger fish, small snakes, and pretty much anything they can catch and swallow. 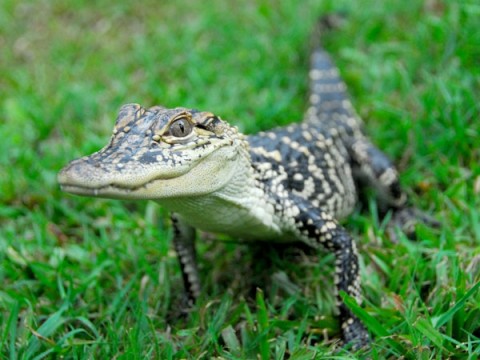 If It Fits, I'll Swallow It!

Of the 10 babies that survive that first year of life, 8 might make it to 4' in length to become sub-adults, and of those, only 5 are likely to survive to reach maturity at 6'. That's 5 out of 24 hatchlings, so you can see that a perilous path does, indeed, lie in front of these babies. Here are a few shots of gators aiming for adulthood. Wish them well. 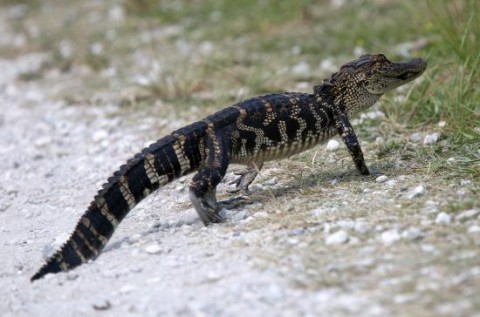 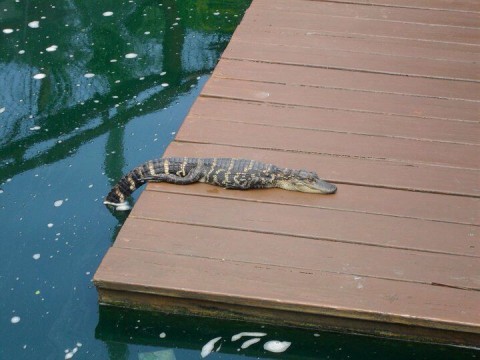 Getting Bigger. Often Seen Basking On Marina and Back Yard Docks at This Size 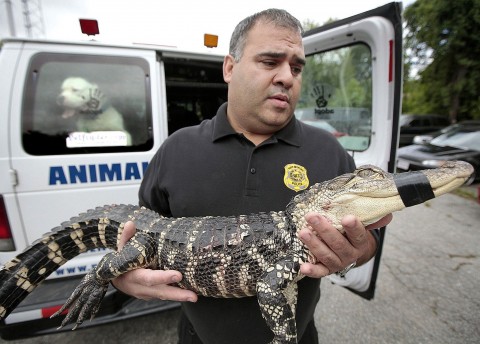 By This Size, They Can Become a Nuisance and Need To Be Removed From Yards & Pools 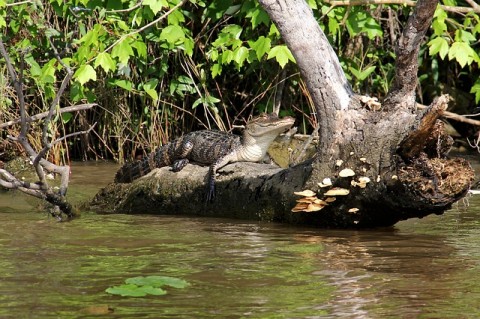 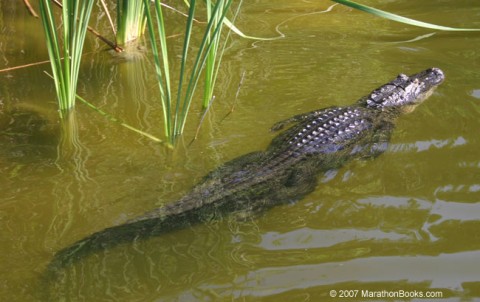 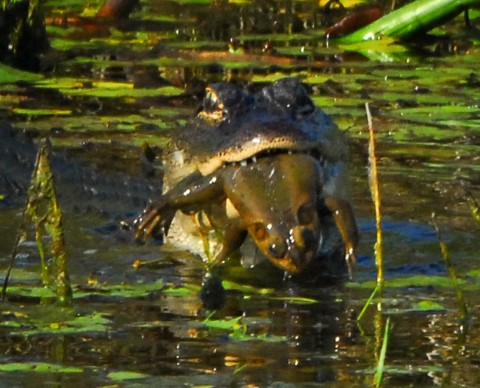 Look, Ma! My First Bullfrog! Yum.
(My apologies to all you bullfrog lovers out there. But a guy's gotta eat!)

And speaking of eating and growing, we know alligators reach adulthood at 6' in length, but just how large can they grow? Adult male alligators can reach 11 to 16 feet in length, and weigh up to 1,000 to 1,320 pounds! However, alligators over 12' in length are not common today. The largest alligator on record is still being debated, but contenders seem to be in the range of 17 to 19 feet. (I'd just as soon never see one quite that large, myself, but records do indicate they're out there. Or used to be.) 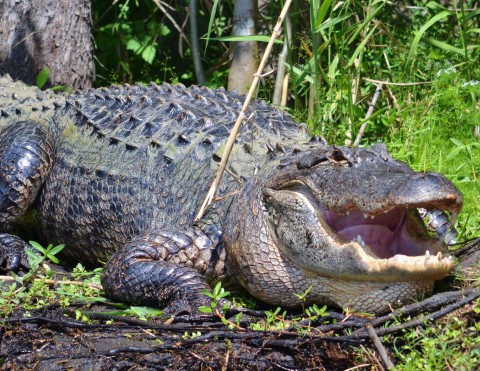 This is a Very Large Alligator Often Seen From the Deck of the Naiad, Almost Always Basking in the Same Spot.
(Photo by Doug Little) 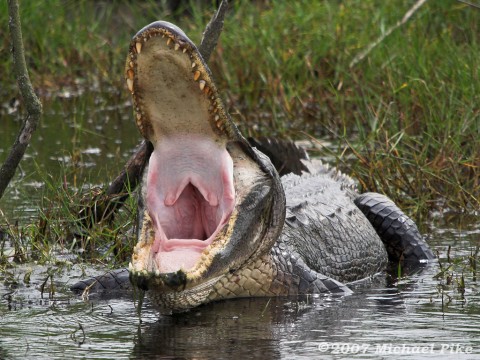 This One Means Business! Take Heed! 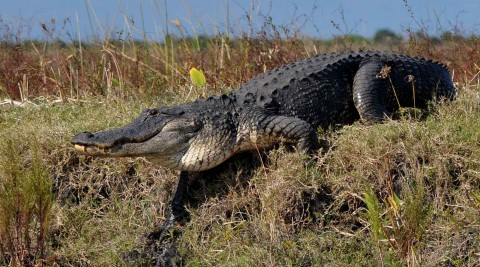 Step AWAY From My River Bank!
(Translation: Paddle backwards as fast as you can!)

And what, might you ask, do the Big Guys eat? Well, the obvious answer is, anything that doesn't eat them first, which at this size means just about everything. Fish make up a very large portion of an adult alligator's diet, but they will eat any and all of the following. 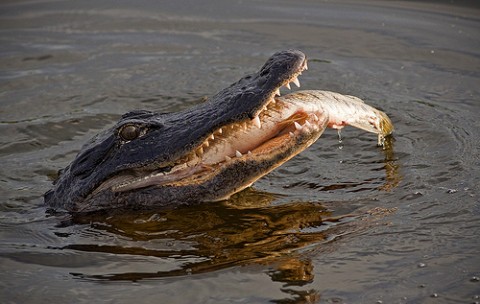 Large Fish, As Mentioned Above 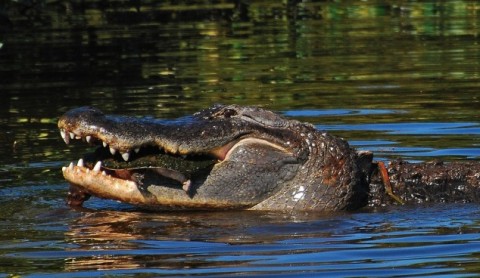 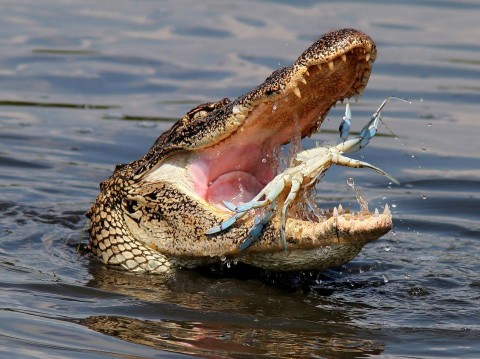 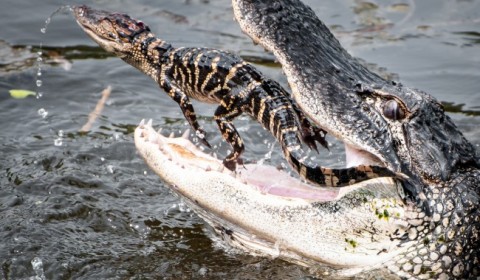 Those Baby Alligators We Discussed Before 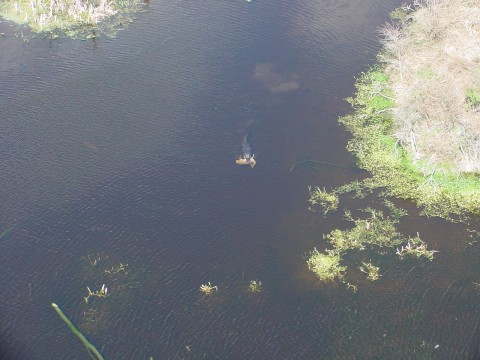 And This Bad Boy Has Managed to Catch a Deer

Though some captive alligators have been said to be over 70 years of age, in the wild, they are thought to be able to live 50 to 60 years, though how many actually do is debatable. Still, that's a pretty long time, and considering that most reference sources say alligators continue to grow for their entire lifespan, this could lead one to think there could be some real whoppers out there. However, the rate of growth supposedly slows down considerably as gators age. I have read differing opinions on this, so I'm not going to state it as fact, but I think I can safely say a very large alligator is probably a very old alligator, too.

Now for those of you who are afraid to come to Florida after all of this, please remember that thousands of people visit Florida every year and never run into dinosaur-sized alligators, or alligators on their local golf course, or alligators ringing doorbells. Most folks who want to see alligators in the wild take an eco tour or the like, and spot them as they cruise by, safely ensconced in their boat seats. Should you wish to meet one more "up close and personal" than that, I recommend a night time swim in any of our numerous rivers and lakes.

Don't worry about looking for them as you splash around in the dark. They'll find you! 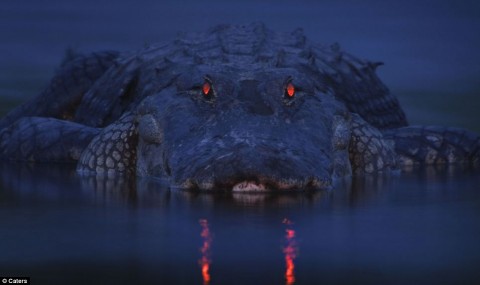 I think that's about all the alligators I can cram into one post, but believe it or not, I have one more alligator post before this series is done. Next week, we'll be taking a look at the rarest reptiles of them all: albino and leucistic alligators. I'll share some stunning pictures and explain the differences between the two kinds of WHITE alligators. Stay tuned!

Until then, I recommend swimming ONLY in bodies of water enclosed in turquoise concrete. It's a rule I've followed my entire life, and I still have all my limbs safely attached! 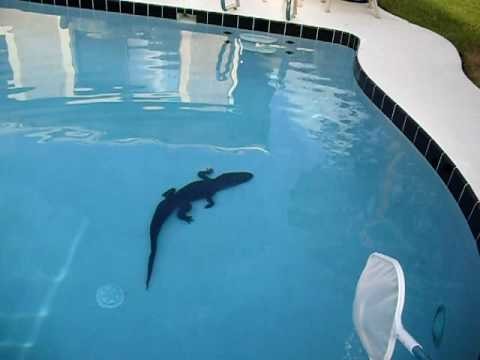 #NotesFromTheRiver - What A Croc! (Or is it?)