#NotesFromTheRiver - Catching Flies with a Pair of Twits 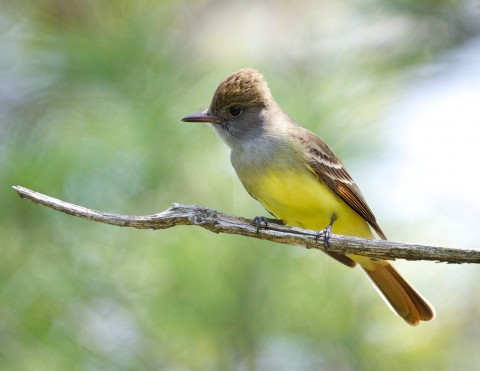 Running a day late (and always a dollar short) on this week's #NotesFromTheRiver, and I apologize, but now and then, Real Life gets in the way of my fun stuff. And posting here is always fun. Thought today, I'd do a short, but hopefully interesting, post about a pair of twits that make the St. Johns River Basin home for part of each year.

NOTE: The term "twit" refers to various smallish passerine birds, often of non-descript coloration. Yes, it also refers to some people I know, but we are going to go with the scientific, ornithological definition of the term. Okay, that's not true. It's actually the just the silly definition often used by birders, along with expressions like LBJ, or "Little Brown Job." We birders have a weird sense of humor. It's what keeps us sane while we wander up and down wooded paths, peering into dense foliage, and trying to identify tiny birds that refuse to hold still.)

Now, where was I? Oh, yes. A pair of twits. The handsome fellow pictured above is called a great-crested flycatcher, because a) he has a sort of bushy crest, and b) he catches flies and other insects, and c) he's pretty great. And by the way, the term "passerine" is fancy-talk for "perching." It denotes a very large order of birds with feet adapted for perching (3 toes forward, 1 backward) and includes all songbirds. 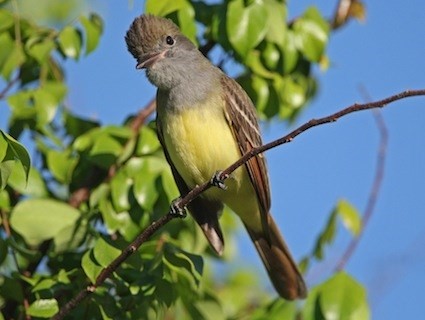 Sometimes the birds watch us back, you know.

I have seen great-crested flycatchers while canoeing the central Florida waterways, but I'll admit, they are easier to spot in my backyard, and I look forward to their return in late spring, each year. These guys nest in my yard, and one of the most welcome sounds of spring for me is their loud call, announcing their arrival. I call them the Threeps, because that's what their main call sounds like to me.

This "tyrant family" flycatcher is a large ( 6-8" long, 13" wingspan) and assertive one, and is usually spotted high in the canopy of trees, watching for unwary flying insects, such as moths, dragonflies, and butterflies who cruise too close. The bird will swoop out from the branch, snatch the insect out of the air, and return to his perch with his prize. 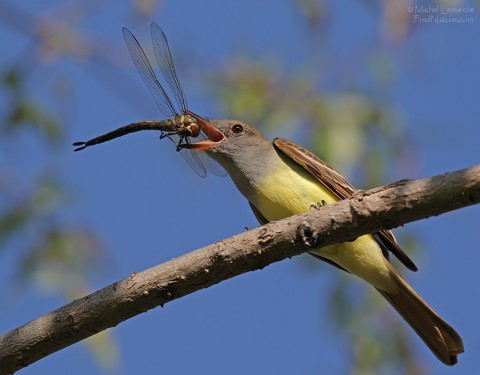 Sexes are not dimorphic. (A fancy way of saying you can't tell the males from the females). They nest in tree cavities, but will also take advantage of nest boxes located in taller oaks and other backyard trees. 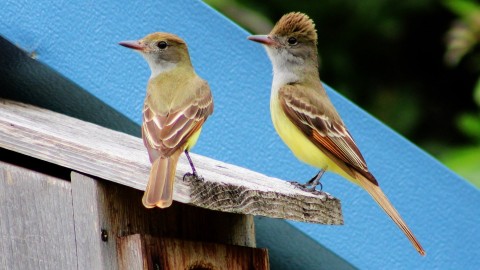 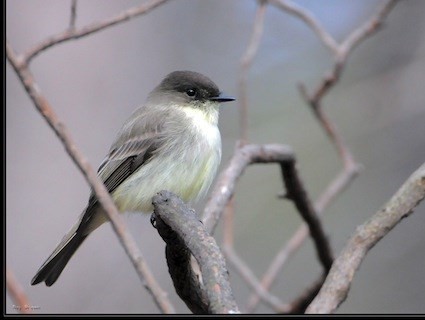 I mentioned today's post was about a PAIR of twits, and here's the second flycatcher I'd like to share with you. The bird pictured above is the eastern phoebe, so named because of his call. "Phoebe, phoebe, phoebe." Or "Fee-bee, fee-bee, fee-bee" if you aren't familiar with the spelling of the name. (Any "Friends" fans here?) This little guy is a much smaller bird than the great-crested, but it is still a tyrant flycatcher, and feeds in much the same way--darting out to snatch insects passing by, and returning to his perch to devour them. Because he tends to frequent lower shrubs and trees, often near riverbanks and lakeshores, the phoebe is easier to spot than his larger cousin. A cruise on the Naiad at the right time of year (winter) frequently results in several sightings. 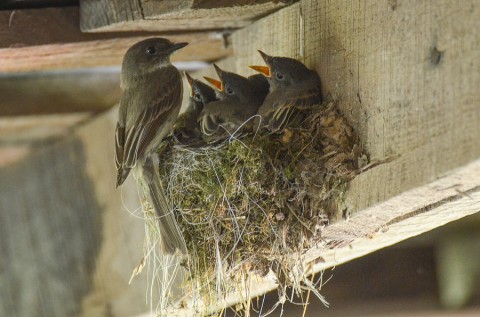 The eastern phoebe isn't a cavity nester and doesn't much care for nest boxes, either, but they do manage to locate their nests in some odd places, usually on buildings, bridges, or other convenient manmade structures. You'd think the one above was in a precarious position, but apparently it all works just fine. The nests are constructed of mud, moss, and grasses, and are so durable, the birds often reuse them the following year. And the female is the homebuilder, building the nest by herself, while the male, apparently, sits around looking pretty. (Nice work, if you can get it, right guys?)

"Here I am, doing my posing. You done with the house yet, honey?"

While much smaller than the great-crested flycatcher, the phoebe is still part of the "tyrant family," and a very handsome little guy in his own right. He even has a small crest to give him that typical "big-headed" look of most flycatchers. Phoebes are spotted mostly in the winter in central Florida, while the great-crested flycatcher breeds here, then migrates farther south during the colder months, usually wintering in Central and South America. 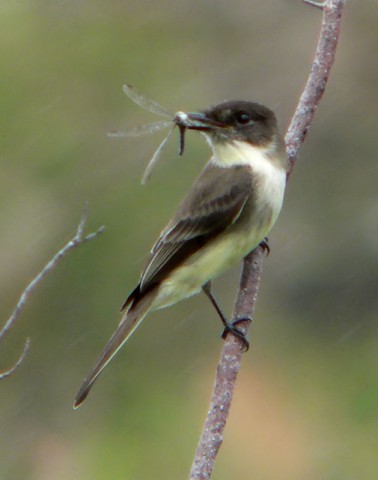 A Happy Phoebe, Ready for Lunch

So there you have it. A short overview of two of my favorite flycatching twits. Hope you enjoyed learning a wee bit about these birds, and will keep an eye out for them. To hear their calls, check out these links:

Go here to Listen to a Phoebe Calling

Next week, something bigger. With fur. And teeth!

Stay tuned!! And remember, keep looking up. You just never know what might be watching you! 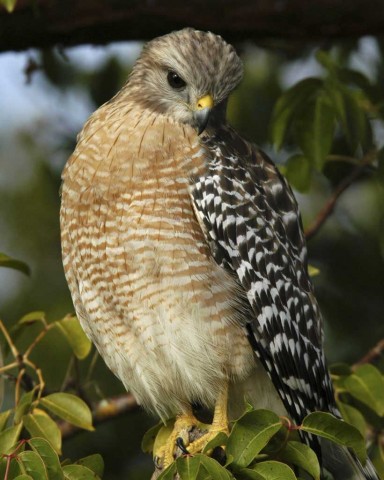