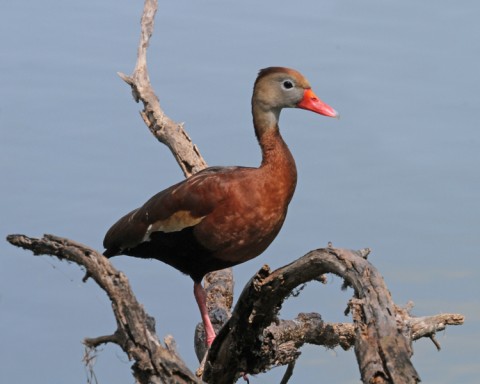 Everybody knows ducks quack. Right? Well . . . yeah, sure. But not ALL ducks. Some ducks whistle, believe it or not, and since one of them, the black-bellied whistling duck, is a favorite of mine, that's the one we'll be talking about--and listening to--today.

Black-bellied whistling ducks were called Black-bellied TREE ducks back in the Dark Ages when I first started birding. The name made sense to me, because you so often saw this large, long-legged duck perched in trees, especially along tall, dead limbs that afforded the duck a great view in all directions. I'm not sure if that's why they liked those so much, but that's where they were often spotted. But some time ago, their "official" common name (which is an oxymoron, by the way, since common names are not official, and are often different from place to place) got changed to Black-bellied whistling duck. Unlike many of the other seemingly arbitrary name changes in ornithology, this one actually makes sense. As mentioned above, this bird whistles instead of quacking. If you can't imagine such a thing, go HERE to check it our for yourself. (But come right back. We have lots more to learn about this guy). 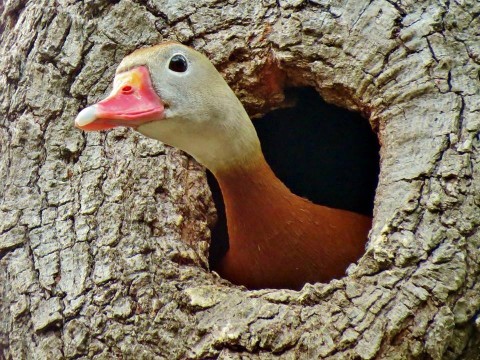 Black-bellied whistling ducks are very fond of trees, as their earlier name implied, not only to perch on, but because they nest in tree cavities, like wood ducks. Now these are not dainty little guys, like the woodies are. They are long-legged and long-necked, and look like they'd have to squeeze to get inside your average tree cavity. But they make it work. 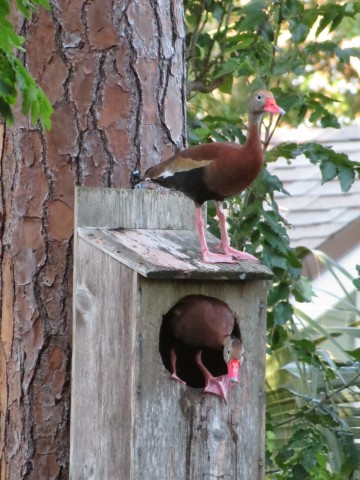 "This One Will Do, Dear. I Like the Kitchen."

And also like wood ducks, they will use nest boxes. If you are lucky enough to have these beautiful birds on a lake or marshy area near you, a large enough nest box will attract them right into your backyard. Though they also share this trait with wood ducks, these ducks share several other traits with swans and geese, including lack of sexual dimorphism (you can't tell the guys from the girls), lack of complex pair forming behavior (why make a big deal out of that whole courtship thing?), and long-term pair bonding (no need to fix it if it ain't broke). 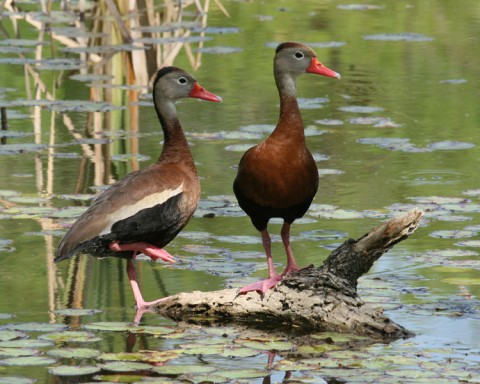 "
Long-legged and Long-necked, Sure, But Definitely Not Geese.

In addition to similar behavior patterns, the long-necked, long-legged silhouette of these ducks is quite similar to that of geese, especially when compared to your average duck. 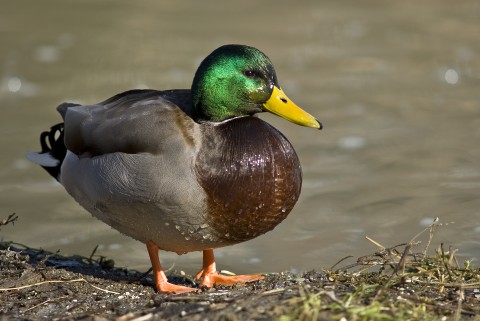 See What I Mean? (Male Mallard for Comparison) 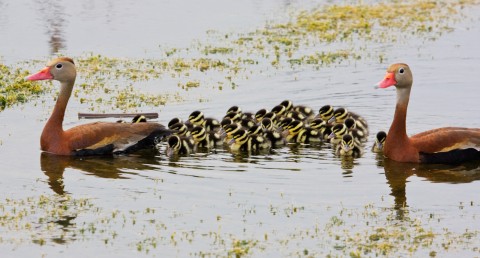 Adorable. And to some, tasty as well.

All right, enough with the legs and necks. Let's move on to raising a family. Black-bellied whistling ducks are very prolific, which seems to be fairly common among ducks in general. When I see families this large, it tells me attrition rates among baby ducks are high, and thus, producing more ducks than will live to adulthood is important for the survival of the species. Pretty much every predator in the area will be eager to have duckling for dinner, and that's just a fact of nature. Turtles, bass, alligators, birds of prey, raccoons, snakes, and bobcats gotta eat, too. 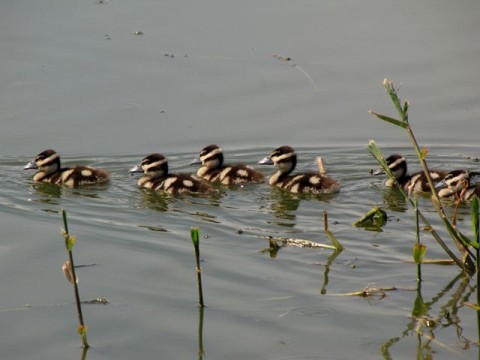 The Survivors of a Much Larger Clutch, Still Paddling Around

Black-bellied whistling ducks lay from 12 to 16 whitish eggs, but clutch sizes can be misleading, as the females will often lay eggs in each other's nests. These "dump" nests sometimes reach 50 to 60 eggs in number! No wonder some of these "families" are so huge! Incubation is provided by both sexes, and lasts approximately 25 to 30 days. The young are precocial as opposed to altricial, meaning they exit the egg with their eyes open, covered in down, and very mobile. Altricial birds, which would be most songbirds, are born naked, eyes closed, and utterly helpless. It is believed that it was a very jealous altricial chick that coined the phrase "Lucky Duck." (Okay, I totally made that up. Still, it would certainly be applicable.) 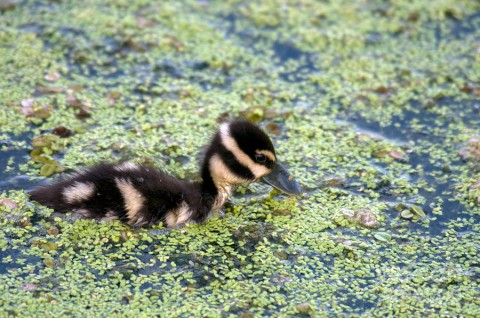 These beautiful and interesting birds breed from parts of the southern United States to tropical Central and south-central South America. If that sounds confusing, this range map should help, though the Florida population is more generally thought to be confined to the central Florida area. East Texas has a growing breeding population, however. 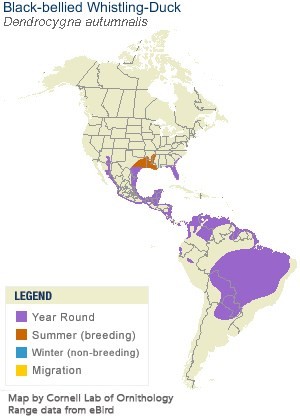 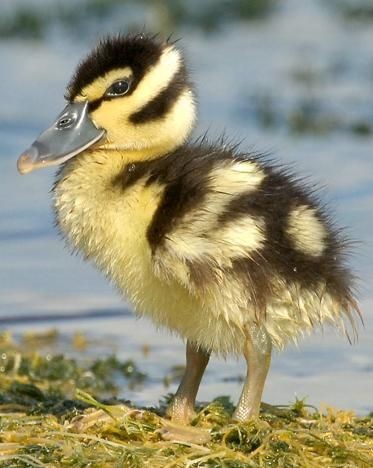 Look for More of These Guys In Central Florida, In the Years Ahead

For those who love vital statistics, me being one, here are some just for you.

Average Length: Medium, Ranging from 19" to 22"
Average Weight: 2.3 lbs
Average Wingspan: 30" to 37"
Description: Long red bill, gray head
Tail and belly are black (hence the name)
Back of neck and cap, chestnut brown
White eye ring
Extensive white in wing, most obvious in flight
(This is considered diagnostic when spotted from a distance)
Male and female look alike
Juveniles similar, but with dark bills and less contrasting belly 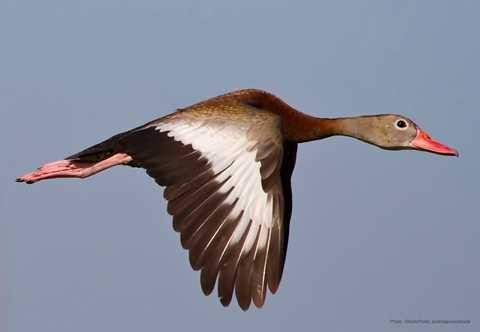 Black-bellied whistling ducks are non-migratory, except in the extreme northern parts of their range, such as Arizona, Louisiana, and parts of northern Texas. Birds in these areas will move south, if the weather is cold enough. There is also a tendency to travel throughout the winter, often moving in large flocks throughout their normal range. This is considered local dispersal behavior, and not true migration. 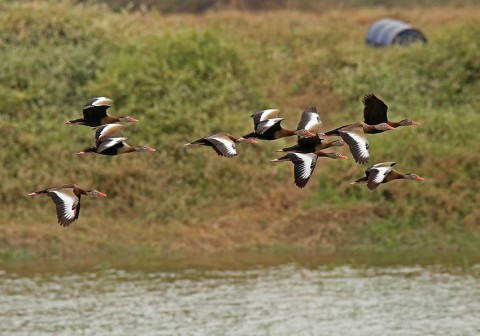 Even at a bit of a distance, the large white area in the wings is clearly visible,
and is a good diagnostic tool for identification purposes. 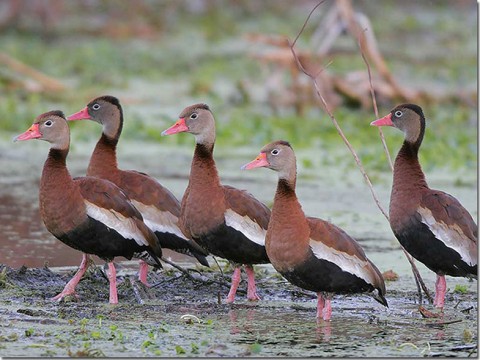 On the ground, the white wing area is less visible, but still very much diagnostic,
especially when combined with the distinct black belly the bird is named for.

In the water, however, the white may not be easy to see. The red beak, long neck,
and hints of the black belly are the best guide then. 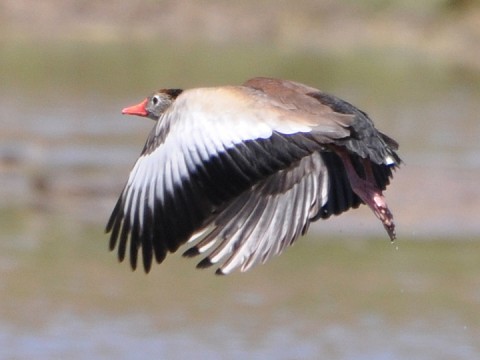 Interesting angle of this photo shows just how much white can be visible in the wing area.

I think we've now covered most of the interesting and unusual aspects of this beautiful duck, so the next few pictures are for your viewing pleasure. Enjoy! 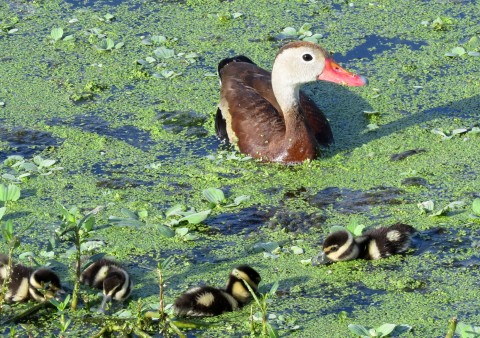 Mama and Babies Amid the Duckweed and Water Lettuce 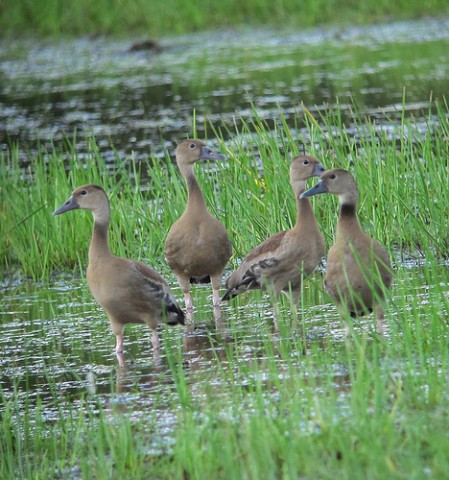 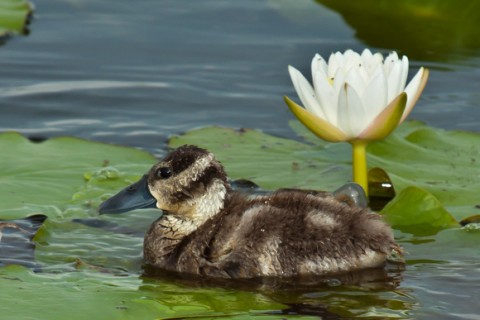 An Older Duckling with Water Lily 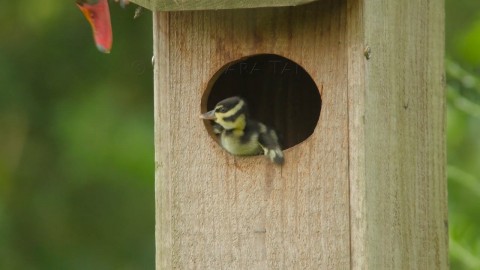 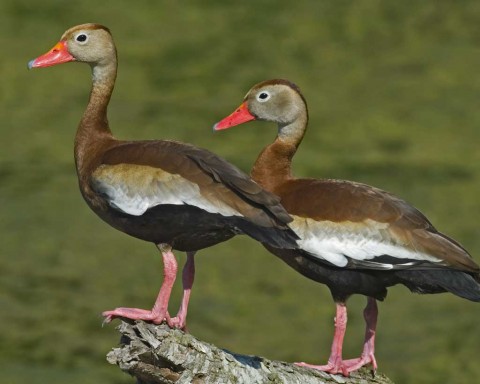 A Gorgeous Pair, Showing Off All Their Field Markings

And folks, I think that's about it for the Black-Bellied Whistling Ducks. I hope you've enjoyed learning about one of my favorite types of waterfowl. Stay tuned for more Ducky Business next time, and remember what I always tell you:

Look UP now and then. You never know what might be watching you.
(But I bet you wouldn't expect to see ducks on a power line!) 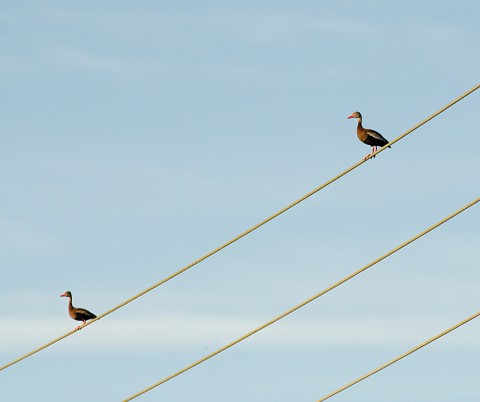 Thanks so much for joining us this week. Hope you enjoyed the pics
and learned a few new things, too.

With my writing life full of deadlines, I sometimes have to skip a week, but I
promise to do my best to be back here next Wednesday, with more fun
pictures and information for ya.

Until then, don't forget to get out on the river.
Captain Dooley and Doug would LOVE to share the St. Johns with you! 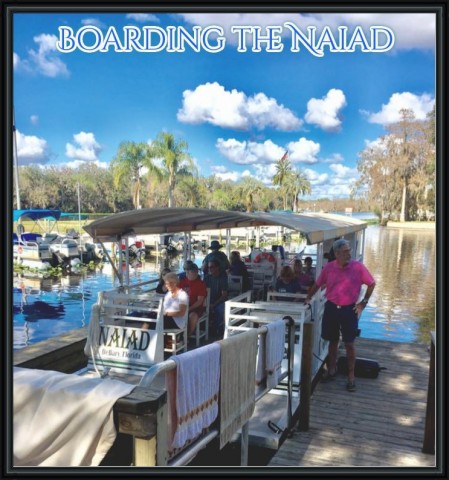 #NotesFromTheRiver - The Fairest of Them All

Another LBJ For Ya!