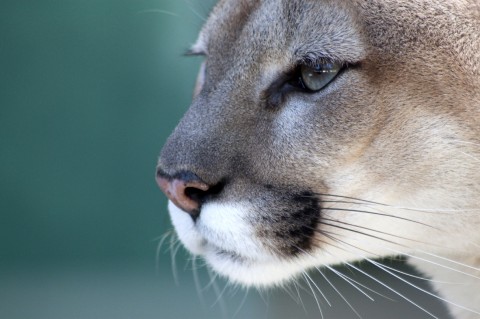 In last week's #NotesFromTheRiver post, I introduced the stunningly beautiful and rare Florida panther, a subspecies of the western Cougar or Puma. The Florida panther prefers life in the forests and swamps of southern Florida, and is considered an endangered species. Sightings are rare, and unforgettable. Take it from me. I saw one over 30 years ago, and the image is still burned into my brain. 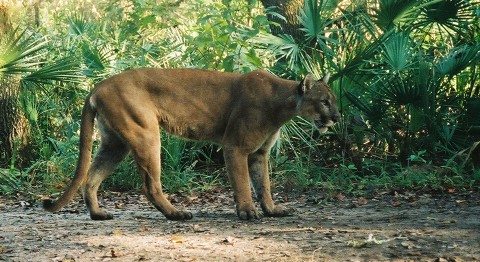 A Florida panther in alert mode. Something ahead has caught his attention.

I've heard it said it's always best to start at the beginning, so that's what we're going to do today. Let's see, I'm thinking that would mean starting where the panthers themselves do. As cute little blue-eyed, spotted kittens, like the one below. (Yep, young panthers are usually referred to as kits or kittens, rather than cubs). 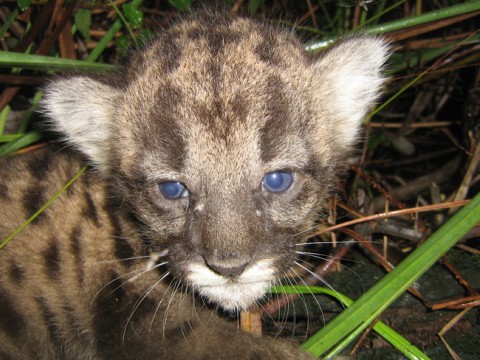 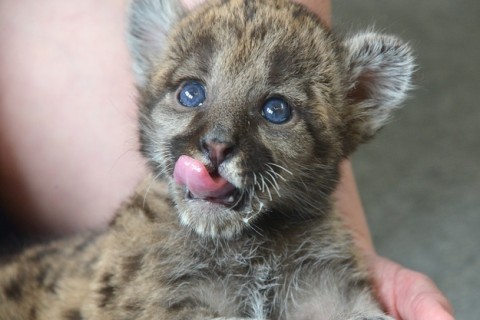 . . . unless you're licking milk off your whiskers!

As the kittens grow, the spots fade, and their coat becomes a uniform tan color, with a creamy underbelly, a dark tail tip, and some dark markings on the ears and around the muzzle. Their blue eyes usually turn a warm amber yellow as they mature. 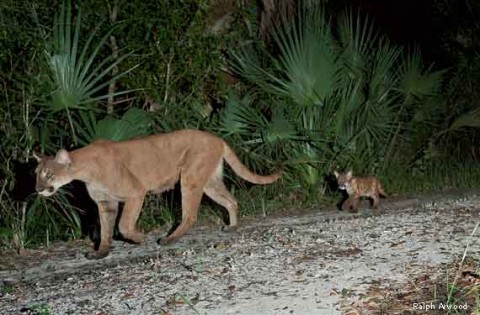 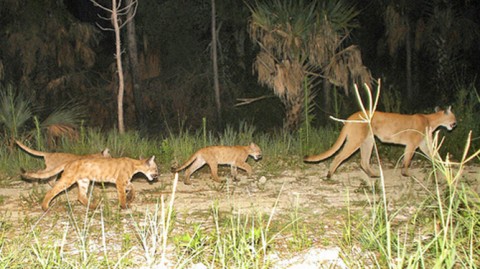 . . . while these three are getting longer legged, and their spots are beginning to lighten.

The kittens are born in warm dens, created by the mother, and often located in dense scrubby areas. The choice of location varies, based on factors such as the availability of prey animals. They spend the first 6 to 8 weeks of their lives in the den, and once they are old enough to leave, they accompany their mother as she hunts. You can see how it works, in the picture above. She's scouting for prey, and they are following along, learning as they go.

Panthers are apex predators, and the only natural threat they face is the American alligator. Alligators, as we've talked about before, will eat anything they can catch, and a panther must be clever and fast to avoid being Gator Chow. Usually, they are. A far more common threat would be people. Even with the protection afforded by their endangered species status, automobile collisions and habitat destruction are two of the primary threats to panthers today. Add in territorial aggression between animals facing more and more habitat loss, and there you have the prime factors in why the animals are still so rare.

There are other factors that impact the breeding habits of the panther, including, believe it or not, highways and large rivers. Almost all panthers struck by cars are male. Why? Because females don't like crossing roads. (We ARE the smarter of the sexes, now aren't we? *ducking for cover, here*) They don't like crossing large rivers, either, possibly because their only natural predator lives in them. This means that the males and females are often separated from each other, and folks, if they can't get together, they can't make more baby panthers. 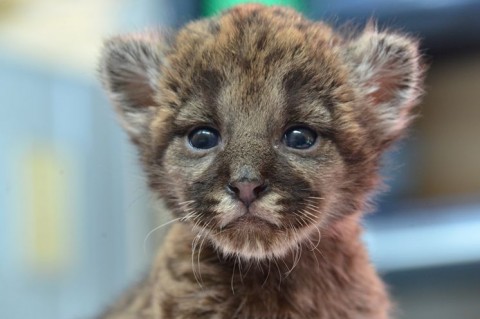 What's that you say? My mama almost didn't meet my daddy because of some stupid highway?

OF course, it isn't all as cut and dried as that. Other factors that impact panther populations include such diverse problems as chemical exposure, resulting in males who are less likely to breed, and inbreeding that occurs when unrelated males and females are unable to reach each other due to being separated by natural and manmade barriers. And then there's the normal inclination of male panthers to roam over very large areas, looking for an available territory to call their own, while females prefer to occupy home ranges close to their mothers. These cats are poor colonizers, which may not have been a problem long ago, but which does impact their population today.

All in all, the reasons for the Florida panther's endangered status are widely varied and complex. (And don't even get me started on the people who still think it's their right to shoot these animals, when they can get away with it.)

Thank goodness for some very vocal and active folks out there, belonging to several groups and segments of the population, who are determined not to give up on our State Animal. Research of all kinds is ongoing, and there are people who have dedicated their lives to trying to save this species. 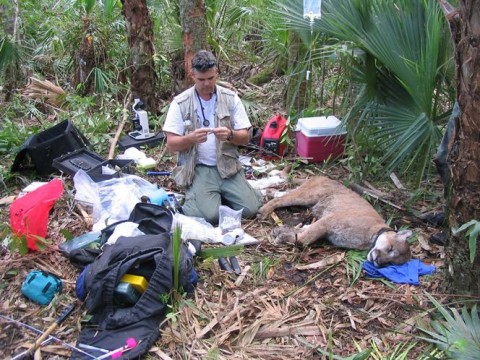 Tests being done on a sedated panther, who is wearing a tracking collar. 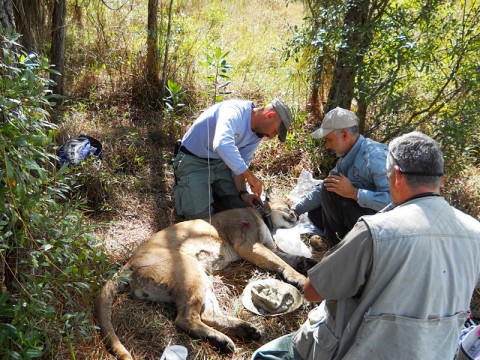 More research in progress.
If anyone recognizes the people or groups in these two photos, I would be happy to credit them. 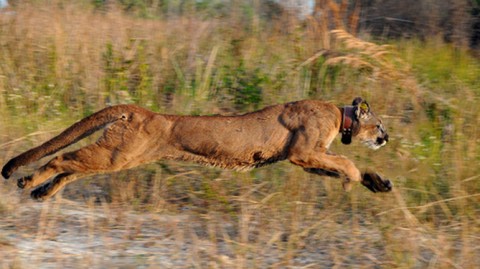 Another panther with a tracking collar.
Little does it know that device might provide information that helps save the species.

On a positive note, injured or orphaned panthers are taken by federal and state officials to White Oak Conservation in Yulee, Florida, for treatment and recovery, and when possible, released into  wildlife management areas deemed appropriate habitat for the animals.

Here are some interesting statistics for those, like me, who enjoy learning such things.

My last tidbit of interest, deserves its own paragraph. Unlike its larger cousin, the western cougar, there has NEVER been a recorded incident of a Florida panther attacking a human. Generally, they are very shy and skittish, though of course, they are an animal with plenty of sharp pointy teeth and claws, and should be never be harassed or cornered. Now some of you may remember newspaper accounts of a man who was jumped by a panther two or three years ago, but the circumstances totally exonerate the cat. The man was a turkey hunter, dressed in camouflage, crouched down in the underbrush, and blowing on a turkey call. Hey, movement in the brush that sounds like a turkey? What self-respecting panther would pass up an opportunity like that? The cat leapt on the man, but when he discovered it wasn't a turkey, he leapt right back off again, and beat it the heck outta Dodge. So, the official record remains unsullied. No recorded Florida panther attacks on humans. 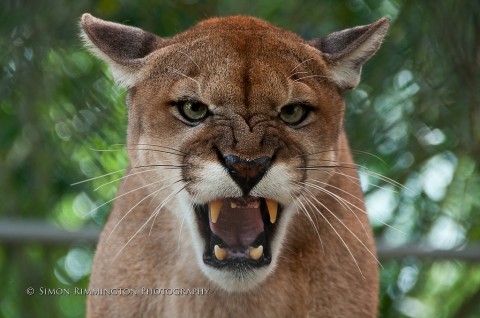 Teeth? Yeah, I got 'em. Long claws, too.
But mostly, I save 'em for catching dinner. 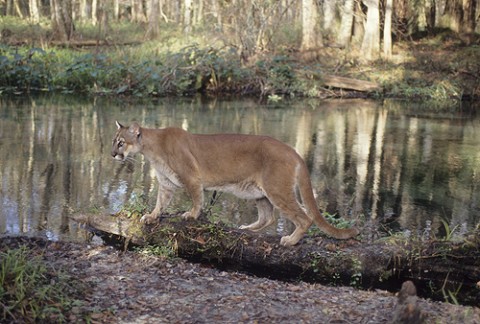 Keeping a watch for alligators, I'm sure. 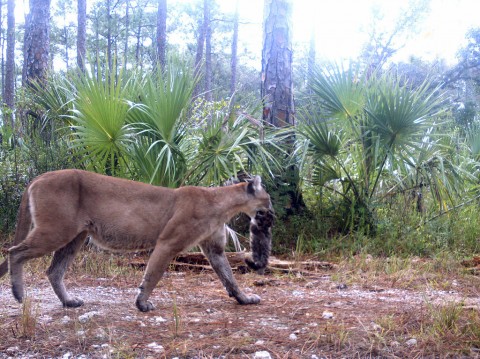 Nope, not dinner . . . just moving her kitten from Point A to Point B. 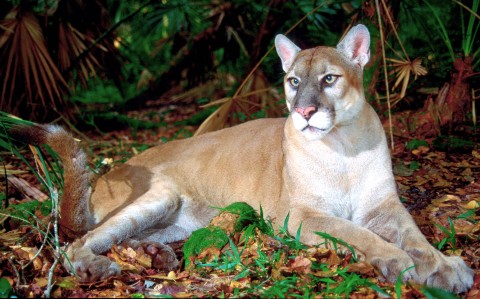 Shoot this regal creature? Not with anything other than a camera! 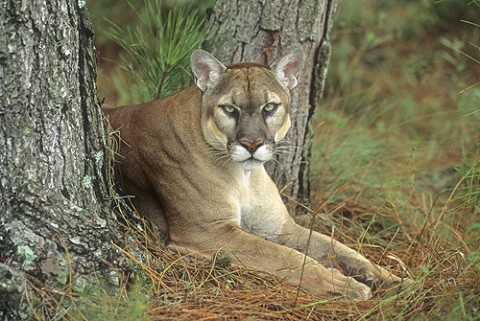 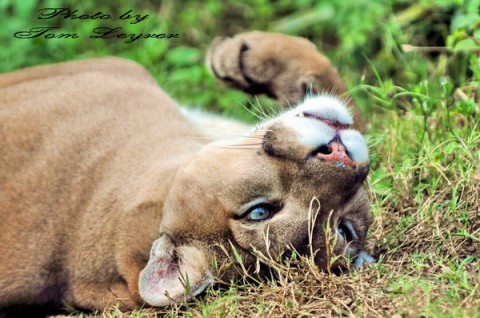 Sometimes, you just need a different perspective on life.

Well, folks, that's about it for Florida Panthers this week. Hope you've enjoyed getting to know them a bit better, and have learned a few new things. And remember, like I always say, don't forget to look up now and then. You never know what might be looking down at you! 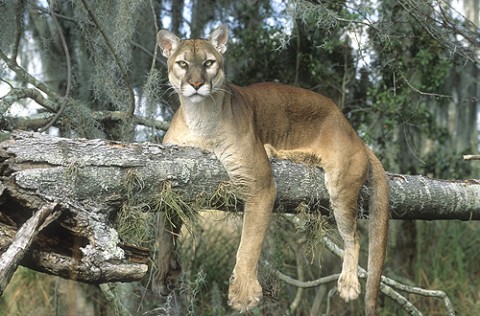 What will I be posting about next week?
I think I'll surprise you.
Be sure to stay tuned!

In the meantime, don't forget to take a cruise on the Naiad and see some Florida wildlife firsthand! 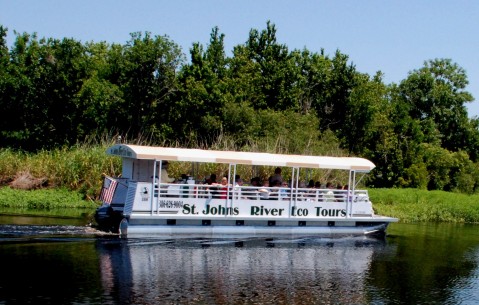 See You Next Wednesday!

What amazing animals. Thanks, Marcia!

I'm so glad you think so. I do, too. Such gorgeous creatures! And thanks for taking a moment to comment, as well.

0 Cancel Reply
I'm so glad you think so. I do, too. Such gorgeous creatures! And thanks for taking a moment to comment, as well. :)
Cancel Update Comment