NOTE: THIS POST WAS SCHEDULED TO RUN LAST WEEK,
BUT A TECHNICAL GLITCH ATE MORE THAN HALF OF IT.
HOPE I'VE MANAGED TO FIX THE PROBLEM, AND I APOLOGIZE
FOR THE DELAY.WITHOUT FURTHER ADO, "HERE COMES THE STORK!" 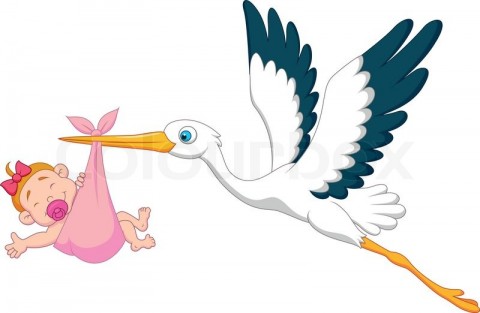 NOOO! Not the Baby-Carrying Kind of Stork! 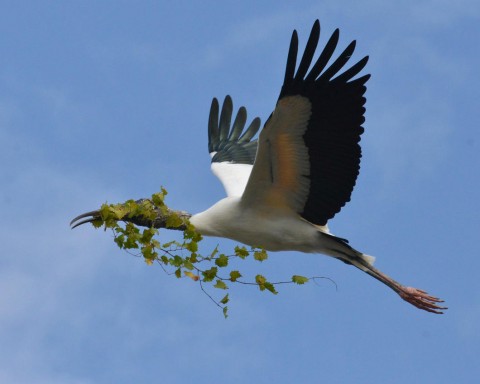 Last week, I hinted I'd be talking about something quite beautiful in the air, but possibly a bit less so on the ground, and here it is--the wood stork. For some reason, I really love this big guy, and I hope by the time you learn more about wood storks, you'll learn to love them, too, if you don't already.

Wood storks are often seen making a beautiful picture as they soar overhead against our azure blue Florida skies. You don't have to be a birder to appreciate a sight like this. And it's easy to identify just what you're looking at, too, since we have no other white bird with wide, black edging along its wings. The only similar bird would be a soaring white pelican, but the silhouettes are very different. 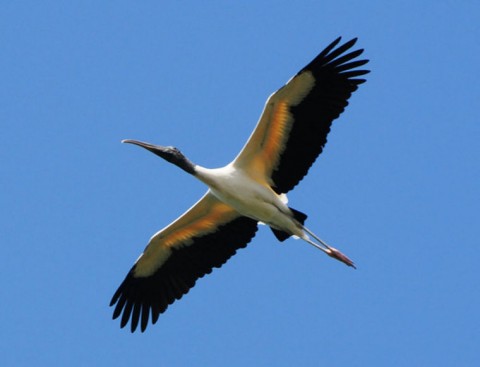 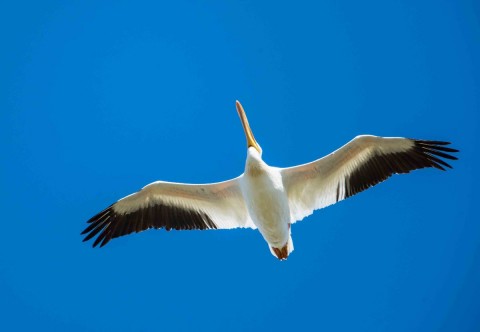 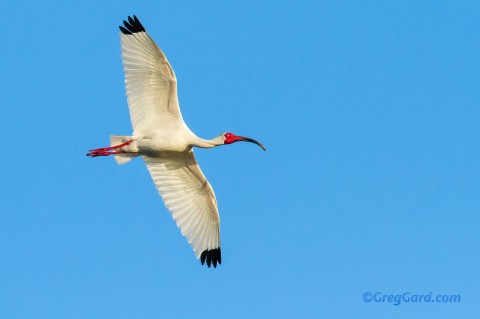 White Ibis
(The much smaller white ibis only has black on the tips of his wings, making it easy
to identify him even from distances great enough to obscure the downcurved
red bill and shorter reddish legs.)

Basically, once you've identified a wood stork in flight, you won't likely get it confused with any other birds soaring over central Florida. But how about on the ground? You are still home free from an identification standpoint. We have no other bird that looks like this: 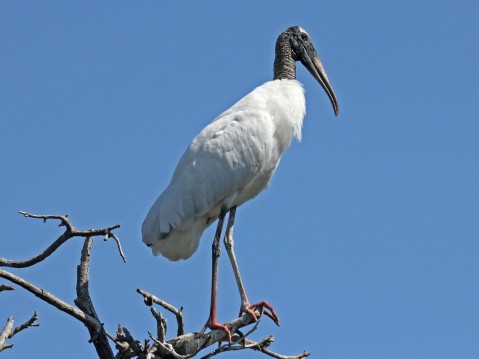 First of all, it's BIG. Wood storks stand approximately 33" to 45" tall.
(Note: Add several feet to that estimate for storks sitting on tree branches.) 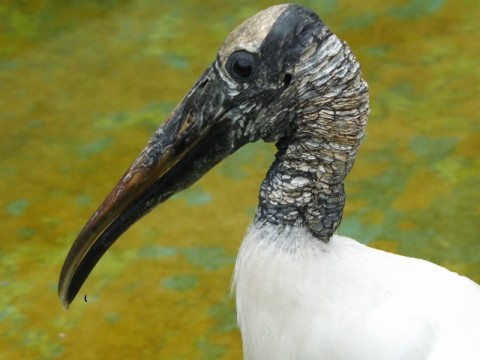 Secondly, it has a completely bare head and neck, of such rough appearance, it
looks like it's carved from wood. Hence, the name Wood Stork. 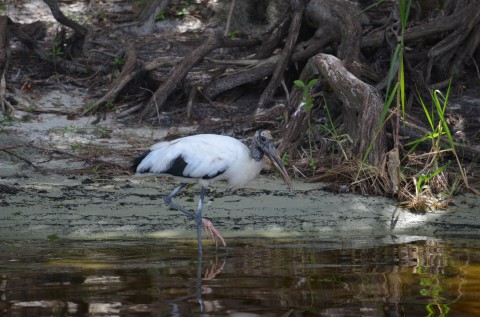 When not in flight or on the nest, wood storks are typically seen wading around the edges of lakes and rivers, searching for tasty things (in their opinion) to eat. This bird was photographed while on tour aboard the Naiad. 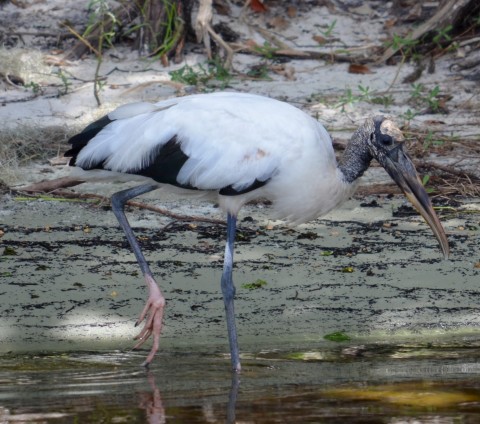 Note that dark, bare skin on the neck, and the lighter bare patch on the head. This is how you tell a
mature wood stork from an immature one, as shown in the next two pics. 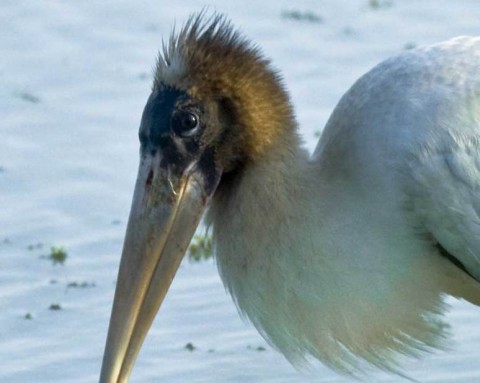 No matter how tall the wood stork is, if he has a feathered neck and head, he's a juvenile bird. 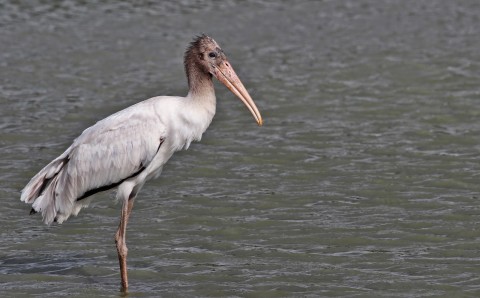 The feathered neck and head show from quite a distance, too.
This is clearly another juvenile bird.

While we are on the subject of juvenile wood storks, let's go all the way back to the nest. Wood storks are colony nesters, raising 2 to 5 chicks with each brood. They have been on the endangered list in the past because they require receding water in order to find the type of food best suited to their babies, and during periods of high water, do not nest successfully. Thankfully, they are currently listed as a species of least concern, with a stable population. Here are some great photos of nesting wood storks. 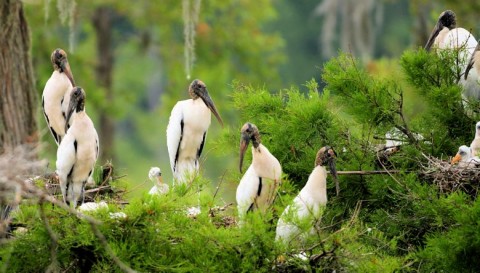 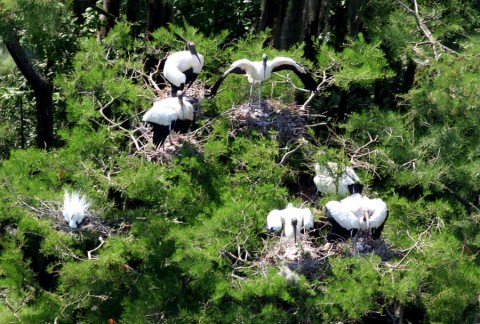 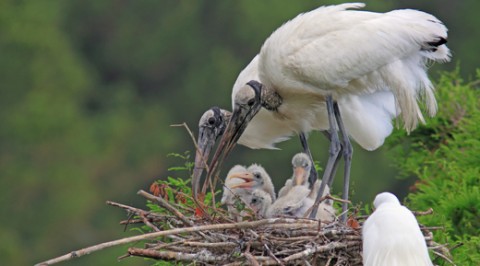 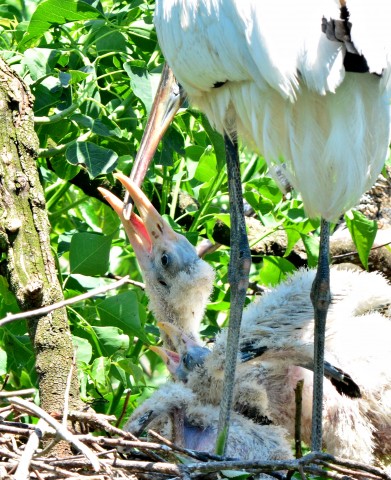 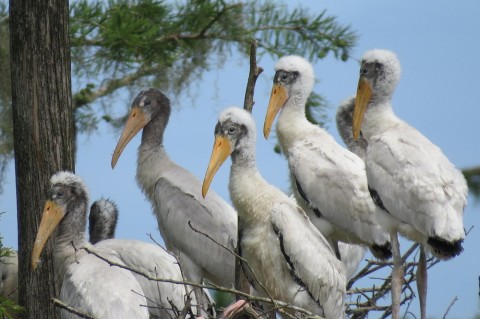 Wood Stork Fledglings Checking Out The World Beyond Their Nests 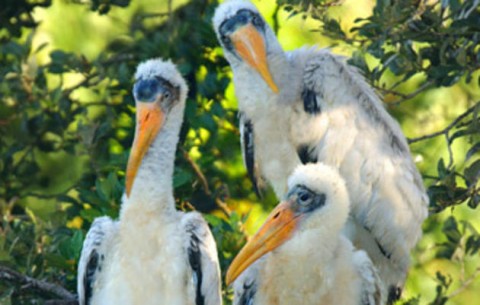 Larry, Curly, and Moe take another look around. 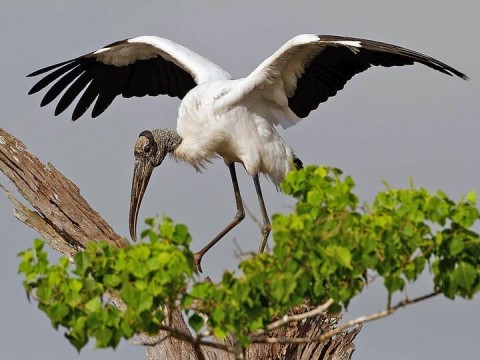 As ungainly as they seem, wood storks are surprisingly agile in the treetops. 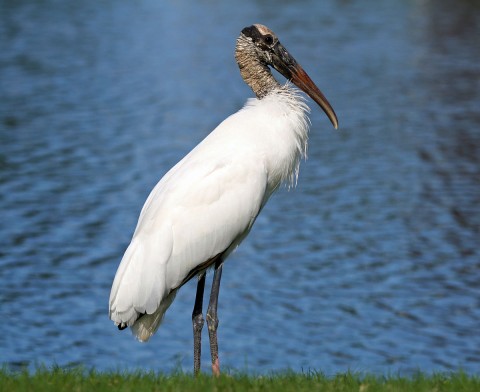 Sometimes, wood storks manage to appear regal, in spite of their bare heads
and somewhat clumsy appearance on land.

HEIGHT: TO 45"
WINGSPAN: 5-1/2'
HABITAT: Freshwater ponds, marshes, riverbanks, and flooded agricultural fields
FORAGING: Nesting birds often forage as much as 80 miles from breeding colony
ALTITUDE: Known to fly as high as 6,000 feet
BREEDING: In Florida, wood storks breed during the late winter dry season when fish are concentrated in shallow pools
FEEDING TECHNIQUE: Storks wade in shallow water, sweeping their partially opened beaks back and forth, and snapping them shut when they come in contact with prey 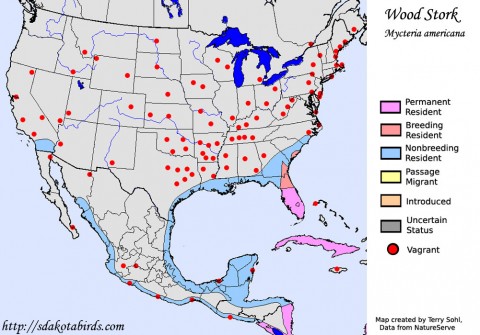 As you can see from the map, wood storks are permanent residents of central and south Florida. Their breeding range extends into Georgia and parts of South Carolina, and the are non-breeding residents through Georgia and completely around the Gulf Coast, down into central America. The only other place they show up in the United States is the very southern tip of California, where they are considered non-breeding residents. So, we are quite lucky here in the middle of the state. We enjoy these birds year round. 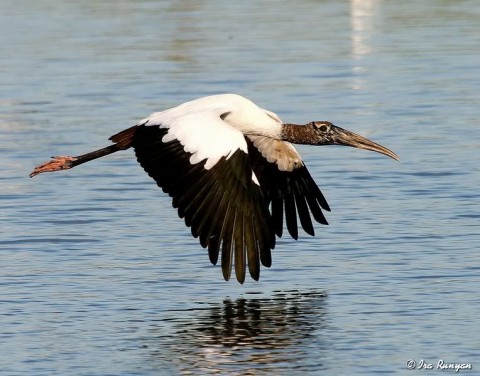 A beautiful wood stork flying low over the water, and showing off his
black wing bands and his light-colored, pinkish feet. 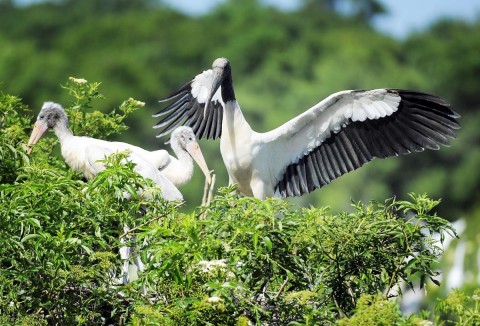 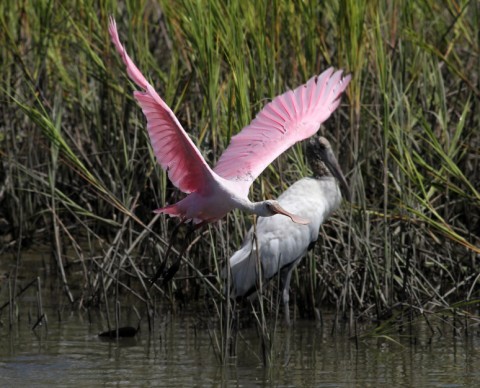 Roseate Spoonbill (Platalea ajaja) and Wood Stork
If wood storks are known by the company they keep,
they must be doing pretty well. 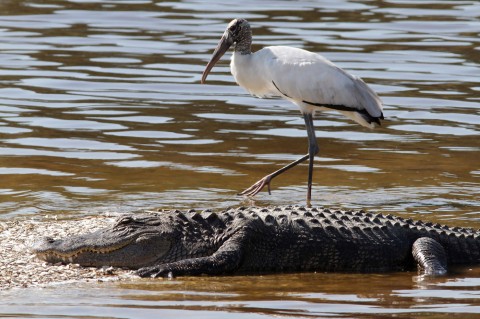 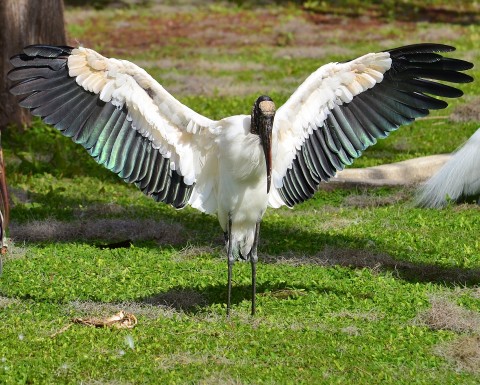 And last, but far from least, my very favorite wood stork photo of all!
Just look at that beautiful green iridescence in those gorgeous flight feathers!
This is surely one of Doug Little's most dramatic and beautiful photos!

And that's about everything I can think of to share about wood storks. Hope you've enjoyed learning about these striking and interesting birds. I'll be MIA for the next two weeks, as I'm going to Charleston for the birth of my new granddaughter. Upon my return, we're going to talk about another favorite big bird of mine, the sandhill crane. And while I'm away, you really should consider taking an eco-tour aboard the Naiad. I know I remind you of that every week, but it's only because I'm so sure you'll be glad you did. Captain Dooley and Doug await your visit, as do all the wonders of the St. Johns River! Why not book a tour today! 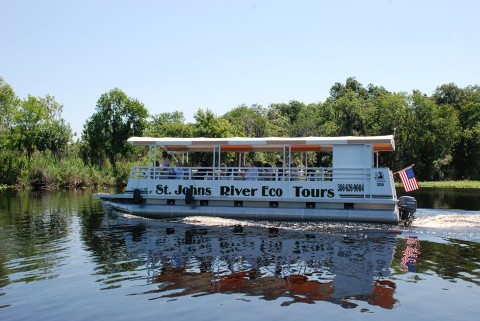 To Paraphrase Neil Sedaka - Catching Up is Hard To Do