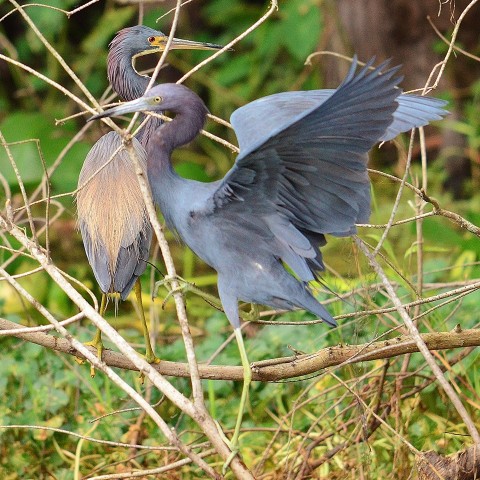 After last week's #WednesdayWonders post, an online friend mentioned she'd seen little blue herons before, but never a tricolored heron. It's quite possible she's seen both, but didn't notice the difference. Tricolored herons are often spotted feeding, preening, and generally hanging out with the little blues, but if  you don't look closely, it's easy to mistake them for the same bird. Hopefully, after today's post, those of you who enjoy identifying the birds you spot will be able to tell the two apart. Doug's photo below is perfect to illustrate my favorite way of telling the difference between the two. 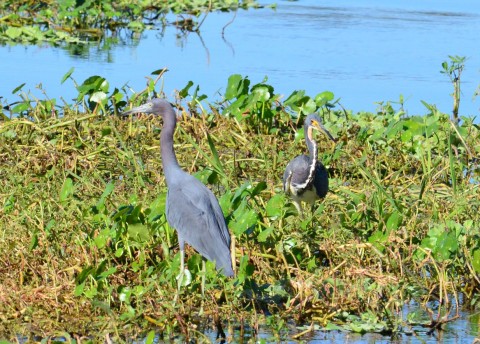 Little Blue Heron (on left) and Tri-Colored Heron (on right).

The little blue heron, on the left, is a solid, slaty blue, with a purplish cast to his neck, and no white underparts. On the other hand, the tricolored heron has--wait for it--three pretty distinct colors, namely blue, buff, and white. The almost always visible white line running down the underside of its neck is diagnostic. That line shows up pretty clearly, even from a distance, and is a dead giveaway that that the bird is a tricolored heron, rather than a little blue. 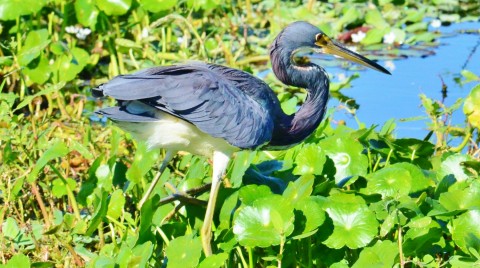 Even from the side, the white markings on the tricolored heron's throat are visible, plus, the bird has a white breast, underbelly, and rump. The little blue heron has none of these white markings, nor does it have the white crest that the tri-colored heron often displays. 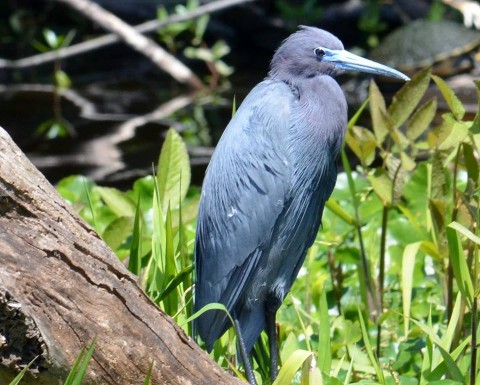 Little Blue Heron is Solid Slate Blue, Even Underneath, With a Purple Cast to the Neck

You might also notice in the picture above, the little blue heron has a dark bill, bluish gray in color. The tricolored heron's bill is mostly yellow, with some black on the upper mandible, as shown below. 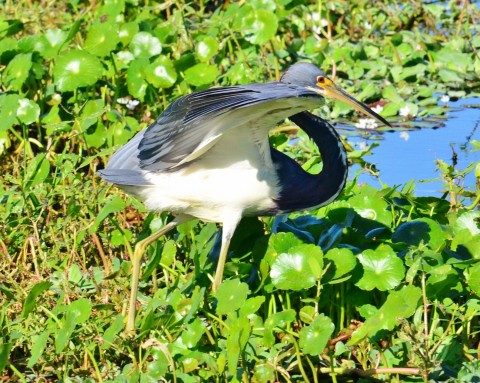 Tricolored herons love quiet, shallow, coastal waters and rivers, where they are sometimes spotted wading belly-deep. They are very sociable during breeding season, often nesting alongside other herons and egrets, in large colonies, or rookeries. Females usually lay 3 or 4 pale green eggs, with both parents incubating them for 21 to 25 days. Both parents are also involved in feeding the young hatchlings, and the babies are ready to fly at about 5 weeks.

These herons eat a wide variety of critters, including small fish, crayfish, prawns and shrimp, insects, tadpoles, frogs, salamanders, lizards and spiders. Wow. A veritable buffet of food sources, just about guaranteeing they'll find something tasty, every time they're hungry. 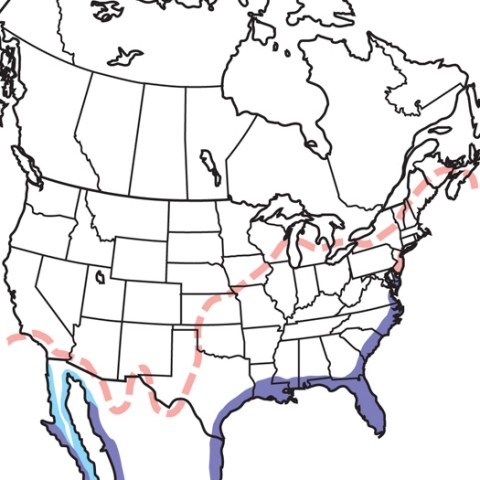 In this next photo, you can clearly see the buff coloration on the back of the tricolored heron's neck. It is sometimes a bit more muted, but it is always there, hence the name of the bird. You can also see that diagnostic stripe of white running from under the heron's beak to join with the white of the breast. Yep. Three colors, all right. 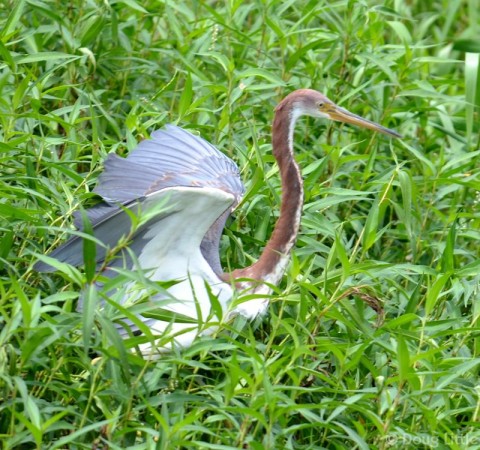 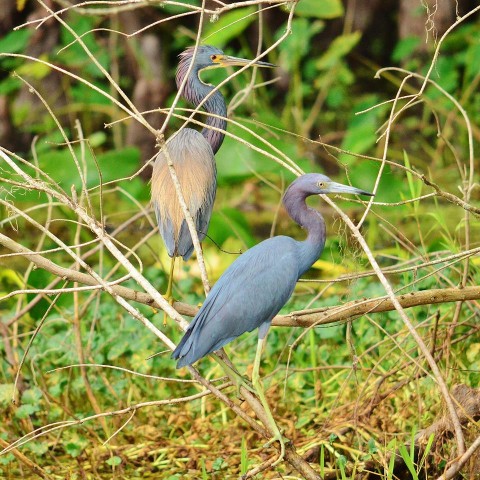 The Longer Buff-Colored Feathers on the Tricolored Heron's Back Are Part of its Breeding Plumage.
(And again, the difference in beak color is obvious in this photo.)

This last photo is one of my favorites. I love that it shows the heron's three colors so beautifully, including the small white crest. The anhinga in the shot is an added bonus. Remember, the buff feathers on the bird's back are breeding plumage, and not always quite so visible. As for the anhinga, such interesting birds! You can bet I'll be doing a post on them before too long.

To hear the call of the tricolored heron, go here.
~~~

Hope you've enjoyed learning how to distinguish between the tricolored heron and the little bliue heron, and seeing some more of Doug Little's great photos. Stay tuned for the next #NotesFromTheRiver, which I believe will feature a mammal for a change. Unless, of course, something else catches my eye between now and next Wednesday.Have a great week, and see you then!