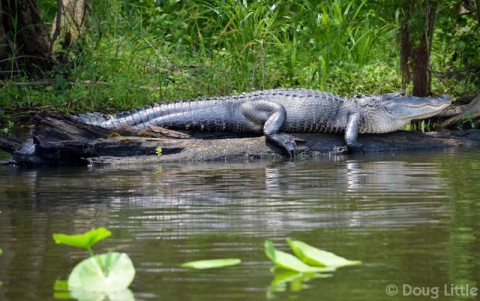 Hello, Friends! I'm happy to report that I'm officially allowed to do a wee bit of work each day, as I progress (slower than a turtle in a mud puddle) toward full recovery. Believe me when I say I wouldn't wish this bug on anyone. Okay, maybe there IS that one guy . . . he knows who he is . . . but other than HIM, nobody else. It's been weeks since I've been able to do more than cough, blow my nose, and moan and groan. (Might as well go for broke when you're that miserable, I always say.) But the good news is, I can spend a few short periods of time at my computer again, so I wanted to touch base with you folks, before you forget all about #NotesFromTheRiver.

On my last real post, I focused on the differences between the American alligator and the American crocodile. Starting next week, I'll be giving you a lot more information on alligators, since they are the reptile most associated with Florida, and very, very common in the St. Johns River Basin area. Along with some excellent photography (much of which will be pictures Doug Little has taken from on board the Naiad), I will be talking about the following: