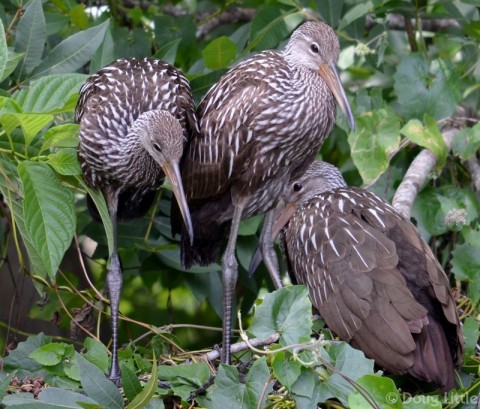 Limpkins on the St. Johns River
Photo by Doug Little

As you can see from Doug's beautiful photo above, limpkins (Aramus guarauna) are striking, though somewhat shy, long-legged waders, often considered marsh birds. While they somewhat resemble the white ibis in size and overall shape, they are more closely related to rails and cranes, at least if you are the type to judge by skeletal remains and DNA. I don't have access to those things, so I'm just going to accept the latest data available, and consider these guys little cousins to our sandhill cranes, standing about 25" to 29" tall, with a wingspan of 42".

For many years, it was thought that apple snails made up nearly 100% of a limpkin's diet, and indeed, their bills are uniquely formed to extract the juicy snail from its hiding place within its curved shell. Here is a picture of a limpkin who played by the rules. He's found a nice, fat, apple snail for his lunch. 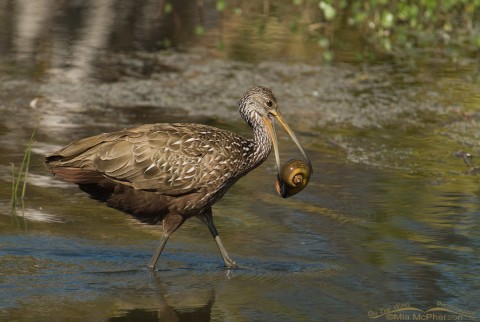 One of the reasons it was thought that limpkins ate apple snails exclusively, is because of those adaptations to the bill I mentioned above. When the bill is closed, there is a gap just before the tip that essentially turns it into a pair of tweezers, and the tip itself is often curved slightly to the right, perfect for slipping into the right-handed chamber of the snail. While the yummy (???) snails do make up a large portion of the bird's diet, where they are plentiful, it is now known that limpkins also eat frogs, crustaceans, insects, and mussels, as seen below. 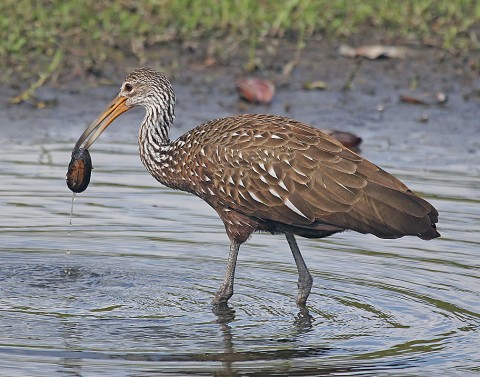 Neither man, nor limpkin, lives on snails alone. Mussels work, too.

Limpkins use marsh vegetation to build their nests, locating them just above the water line. They lay 3 to 8 olive or buff colored eggs, which are incubated by both parents, and hatch in about 27 days. They will also build a nest of sticks in low trees or bushes, though less frequently. The young are absolutely adorable when they hatch. This is scientific fact, and has nothing whatsoever to do with my personal point of view. Honest. Okay, maybe a bit. Beauty IS in the eye of the beholder, after all. But I ask you, how cute is this? 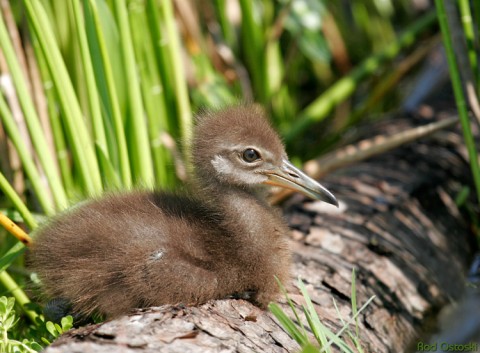 Pure cuteness, personified. The only thing cuter than this guy, would be this next one. 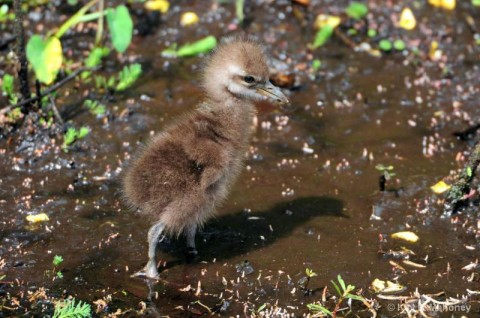 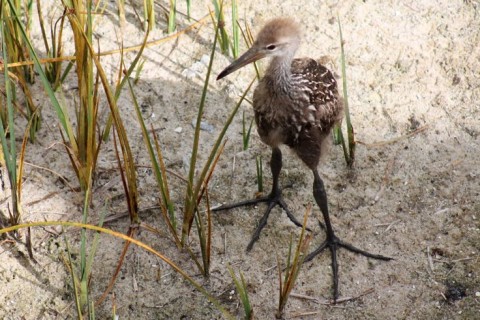 And then there are those awkward teenage years,
where a guy's feet grow twice as fast as the rest of him!

Limpkins were named for the halting, stilted-looking way they walk. Considering that, it should be no surprise that a group of limpkins is called a Hobble. (Not to be confused with those little guys in Lord of the Rings, though. That's a whole 'nuther story.) 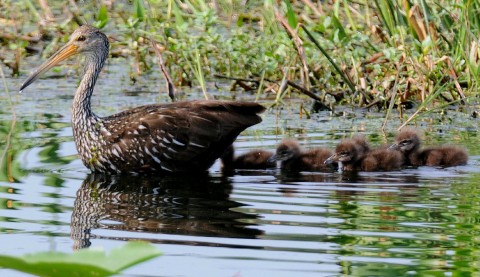 Does a single family of limpkins constitute a hobble? My post, my rules. I say YES.

The range of limpkins in North America is pretty much limited to Florida. That's one of the reasons why birders from all over the U. S. come here, just to add them to their birding Life List. Don't laugh. That's a real thing. And it is serious business among birders. My husband, who is not a birder, once asked me if something so valuable to a practitioner of the art of birdwatching could be willed to the next of kin when a birder passes on. Silly man. You must EARN every bird on your list, yourself, you know. And if you live in Ohio, say, and want to add limpkins to YOURS, you must come here to Florida! That's the only way to do so, without going much farther south. Like to the islands. Or the marshes of South America.

One last thought. Let's address the mating habits of limpkins. Limpkins may be monogamous, with the female joining the male's territory. (Alpha limpkins???) Or they can be, and I quote, "serially polyandrous," with two or more females joining a male. Serially polyandrous. Not sure about you, but that sounds downright creepy to me. And dangerous. Imagine two females of the human species, each armed with a long pointy weapon, sharing the same male. Yeah, like that would last very long. But hey, if it works for the limpkin, who am I to argue? I'm just sayin' if I ever find a male limpkin lying dead somewhere, with lots of little holes poked in him, I'll know what happened: serial polyandry!

And on that note, I'll wrap up this post, silliness and all, with my apologies for it being a day late. Real Life very rudely got in the way this week, but if the bridge don't go, an' the creek don't rise, as they say, I'll be back on track by next week. Meanwhile, to make you smile, check out the crazy call of the Limpkin, and then come to Florida to take a tour on the Naiad, and see some for yourself. Go HERE to listen.

Limpkin with White Ibis for comparison.

Thanks for reading, and next week, I'm adding a new "Feature" to #NotesFromTheRiver. Be sure to stop by!
Until then, keep your eyes open. You never know what you'll see!