#NotesFromTheRiver - Manatees, and Sea Cows, and Mermaids--Oh, My! 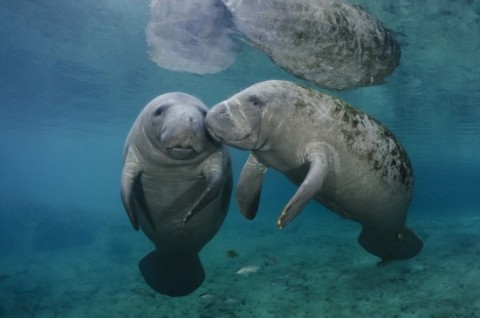 Our Meet the Author Eco Tour on Saturday was so much fun! For those of you who were unable to attend, the day was positively beautiful, with puffy, white clouds scattered across an impossibly blue sky, and a cool enough breeze to keep us all comfortable. We had a full boat load of friendly, engaging passengers, and we spotted lots of alligators, all the usual wading birds, and at least two manatees. Unfortunately, we were having so much fun, we forgot to take pictures! (If you were along, and have any you’d like to share, please let me know. I’ll be happy to post them.)

We’ve talked briefly about alligators, and last week’s post featured barred owls (which we did not spot this time around), but we haven’t yet had a chance to talk about that perennial favorite, the Florida manatee. Until now.

Let’s start with the basics. The manatee is Florida’s state marine mammal, and is a large, completely aquatic, relative of the elephant. Mostly gray to grayish brown, their thick skin often has a growth of greenish algae that provides a moving buffet for little fish. 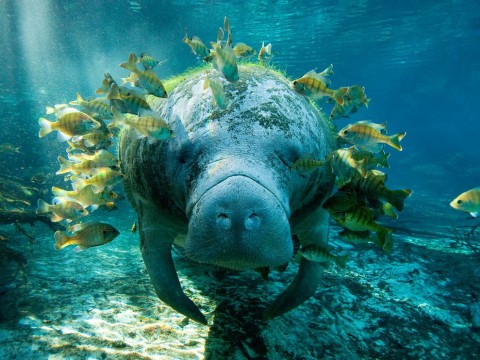 Manatees propel themselves through the waters of Florida’s coasts, rivers, and springs via their strong, flattened tails. Using their flippers primarily for steering, or crawling along river bottoms while feeding, it’s that powerful tail that allows them to move at speeds of 5 to 19 mph, though the higher end of that range is limited to short bursts. The manatees cruising Florida’s waterways have a range that extends southward clear to Brazil. 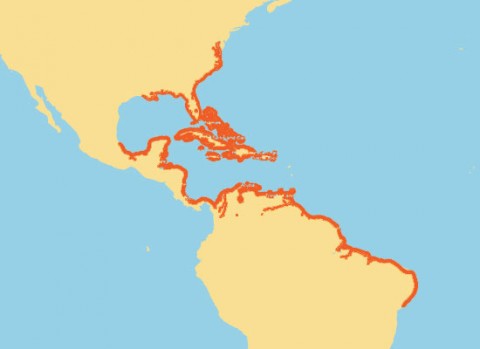 Being large, slow-moving animals, manatees can be quite vulnerable, and their numbers declined dramatically during the last century, primarily due to hunters seeking hides and oil. Today, of course, manatees are fully protected, as they are considered an endangered species. Thus, harming or harassing them in any manner is prohibited. 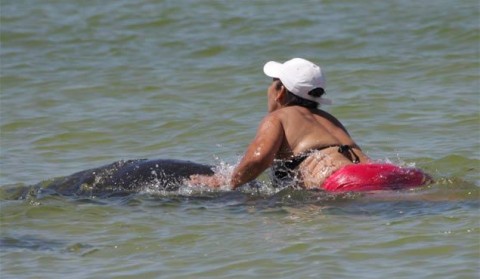 DON’T DO THIS!!
(Unless you have a deep desire to get to know a jail cell,
up close and personal!)

Born underwater, manatee calves have to be helped to the surface by their mamas for that first breath of air, just like whales, but the new arrival is capable of swimming on its own in an hour or so. Typically, only one calf is born at a time, though twins are seen on occasion. 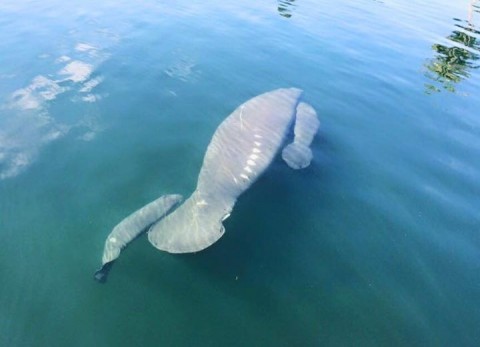 I’m sure manatee moms are just as nonplussed by those infrequent cases of double trouble as human moms are. But, also like human moms, they adjust. The calves, 3 to 4 feet long and weighing 60 to 70 pounds at birth, nurse under water, but while mother’s milk is all the little ones need, adult manatees are voracious grazers.

They consume water grasses, weeds, water hyacinths, algae, and pretty much anything green that they can reach, eating as much as a tenth of their own body weight each day! (That amounts to something in the neighborhood of 120 pounds of vegetation every day! Needless to say, manatees play an important role in regulating plant growth in areas where they feed often.) 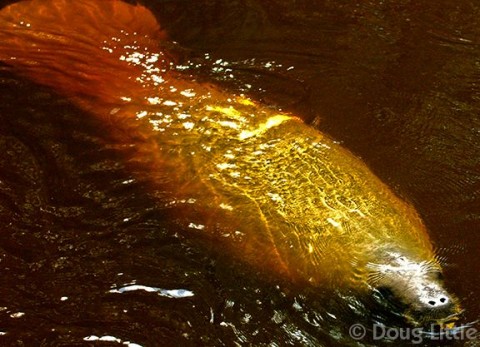 Manatee as seen from the deck of the Naiad.

A few interesting manatee factoids, for those who enjoy such things:

The next three photos were all taken by Doug Little, from the deck of the Naiad. 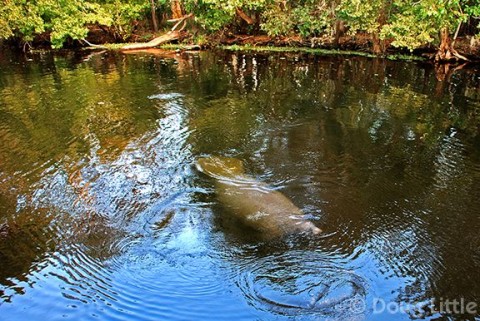 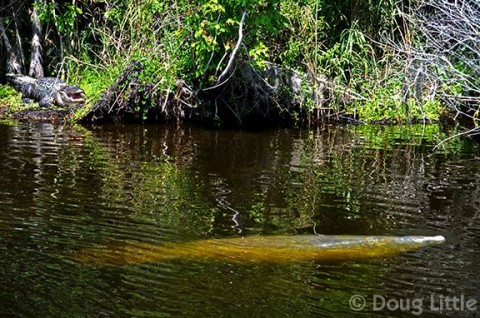 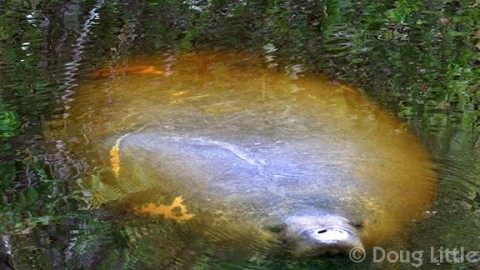 Close up of manatee surfacing to breathe.

While manatees are often seen throughout the year on the St. Johns River, the highest concentrations of them occur during cold weather, when they seek the warmer waters of our springs. Large numbers can be counted at Blue Springs State Parks, and various other locations, as these gentle giants try to stave off the cold. 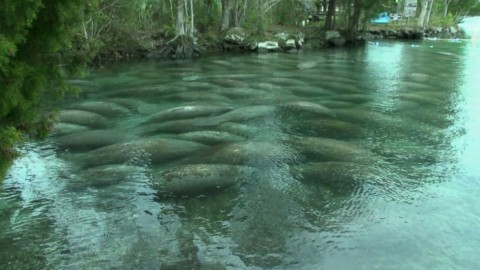 I’ve been on several eco tours when the manatees cooperated and were visible long enough for everyone to get some good photos, but even though we did see two on Saturday, they weren’t as eager to have their pictures snapped as they sometimes seem to be. We could follow their progress by the large rings they leave as their tails propel them through the dark water, but for the most part, the only part of the animals we could actually see were their snouts, as they raised them to breathe. Still, it was exciting to know they were there, this most interesting and unusual of animals. 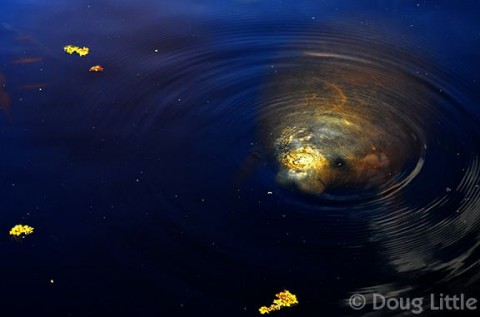 And if you are wondering about the title of this post, it harkens back to the days of early sailors, who claimed they had seen mermaids with babies at the breast. Many have said these sailors were actually catching brief glimpses of manatees with young. Personally, I’ve always found that pretty hard to imagine. I’d have to have drunk my entire week’s worth of grog at once to mistake a manatee for a mermaid, but hey. I wasn’t there! Maybe they ran across some very pretty manatees. Or some really unattractive mermaids. 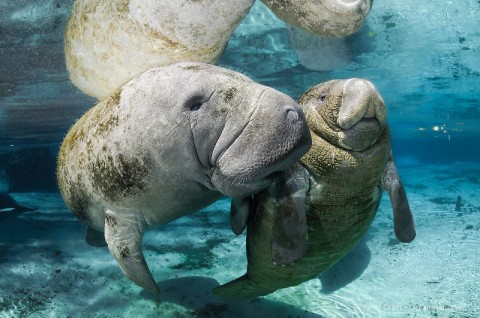 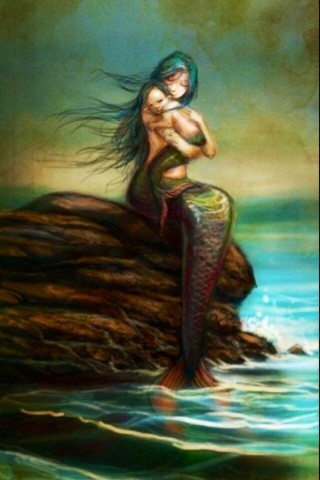 And on that note, I’ll wrap up today’s post. If you have any questions on manatees, or any comments you’d like to share, please let me know below. And remember, when you are out on the river, PLEASE follow all posted speed limits. A manatee’s worst enemy is the propeller on your boat, and 2016 was a record year for manatee deaths caused by speeding boaters. Manatees simply aren’t fast enough to get out of the way, so it’s up to us to slow down, and keep an eye out for these gentle giants. THANKS! 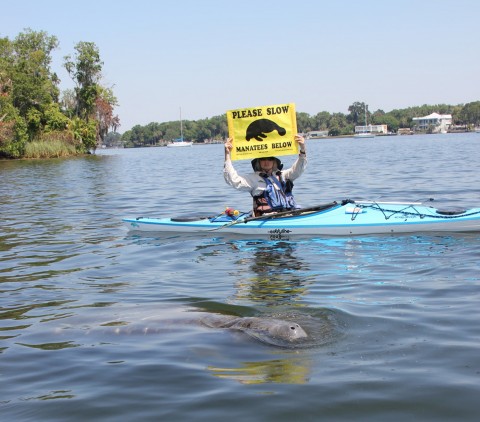